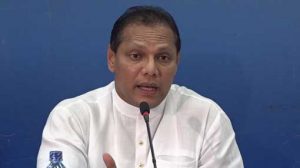 A meeting was held today (14) in the office of the Opposition Leader, Mahinda Rajapaksa between the Sri Lanka Freedom Party (SLFP) and the Sri Lanka Podujana Peramuna (SLPP).

The meeting was held with the intentions of discussing a strategy on working together to maybe form a new alliance and to work towards the common goals of both parties.

The meeting was attended by General Secretary Dayasiri Jayasekara, Former General Secretary of the Party, Rohana Lakshman Piyadasa and Thilanga Sumathipala from the SLFP and to represent the SLPP, Professor G.L. Pieris, Dr Jagath Wellawatte and Dullas Alahapperuma.

Minister Jayasekara commented after the discussions had concluded that talks were very successful and that further talks will take place next week.

Time frame to be proposed in Geneva

January 28, 2019 bythemorninglk No Comments
A time frame is expected to be proposed at the UN Human Rights Council (UNHRC) in Geneva for Sri Lanka to meet its commitments under a resolution it cosponsored in 2017.

Do not believe false social media posts on a lockdown: Shavendra

May 21, 2021 byMihi Perera No Comments
Army Commander General Shavendra Silva says that reports circulating on social media which claim that the country will be placed under lockdown for 14 days are untrue.