September 1, 2020 by Sarah Hannan No Comments

Former President and Sri Lanka Freedom Party Chairman Maithripala Sirisena issuing a message on the occasion of the party’s 69th year of operations vowed that the SLFP will always stand for the future of the nation and its children. 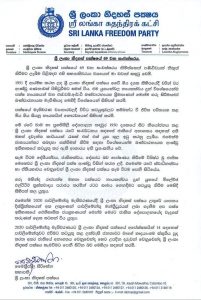 Below is a translation of his message that was published in Sinhala:

I respectfully remember all the deceased leaders who sacrificed their lives in various activities during the party’s election campaigns.

Representing the leftist and progressive political camp in this country since the 1950s, the Sri Lanka Freedom Party has done a tremendous job for the development of the country and the future of the nation in each era. It is also commendable that the Bandaranaike government in particular worked to strengthen international relations.

It should be recalled here that during the era when Mahinda Rajapaksa led the party, the military took action to defeat the LTTE and bring peace to the country.

Also, the victory of the Sri Lanka Freedom Party in the 2020 Parliamentary election from the Jaffna District should be noted as a historic victory of our party as well as an important factor in the national politics of this country.

I would like to express my heartfelt gratitude to the people of Sri Lanka for sending 14 SLFP candidates to Parliament for the 2020 Parliamentary Elections and I would like to state that the SLFP will always stand for the future of the nation and the children born tomorrow.

October 6, 2021 byRuwani Fonseka No Comments
The bail application put forward by the software engineer of Epic Lanka Technologies, who was arrested in connection with the erasure of National Medicines Regulatory Authority (NMRA) data, has been r

April 26, 2021 byNews Admin 1 Comment
State Minister of Primary Healthcare, Epidemics, and Covid Disease Control Dr. Sudarshini Fernandopulle is of the opinion that stricter restrictions on non-essential activities, for at least a month,