Slow Dancing with the Stars

What would you do if the harsh reality that is mortality was forced upon you before you thought it was time? Would you transform into a resilient realist? Would you abandon hope and give into despair? Or would you grab life by its lapels and enjoy each sunrise with fervent enthusiasm? 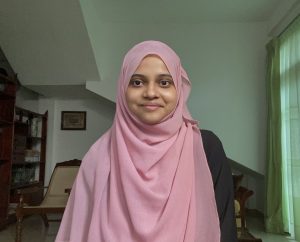 Author of ‘Slow Dancing with the Stars’ Najaha Nauf

To 21-year-old Najaha Nauf, author of “Slow Dancing with the Stars”, the fragility of human life and its intricate tango with the universe brought perspective, strength, and creativity amid adversity. Brunch spoke to Najaha, an avid psychology student and ardent “universe fan”, about the inception of her story.

The ultimate muse and the unattainable romance

Speaking about how the title of her story, “Slow Dancing with the Stars”, came to be, Najaha took a trip down memory lane to when she was a member of the Gavel Club in her school, where she was asked to speak about herself; only, it had to be about how she saw herself, and not how the world would see her. Forever enchanted by the beauty of the universe, Najaha could not let go of the thought that stars bear a remarkable resemblance to human life.

“There’s the birth of a star, the life, the death, and then, there’s the life after death. As I continued to compare and work on my Gavel Club speech, I started seeing a lot of people around me as being stars,” she said.

With the universe as her ultimate muse, Najaha’s creativity and inherent inner writer were drawn to the melancholia of an epic yet unattainable romance. “Slow dancing is the epitome of romance I think, and who wouldn’t want to slow dance with the stars? But you really can’t slow dance with stars, can you? To me, that was a love story that was as beautiful as it was tragic – an idea we all fall in love with, but can never become reality,” she shared.

Starting her writing at the age of 15, Najaha’s work always leaned towards science and the universe, being compared to an individual or character she concocted, or was real. However, Slow Dancing with the Stars, according to the author, while being inspired by the universe, takes a completely different form. Najaha shared that during her Advanced Levels (A/Ls), she studied psychology, and during a chapter on delusional disorders, her teacher seemingly brushed away the severity of the condition, which Najaha found upsetting.

“My teacher said that it was not such a big issue, but to me, it was just sad that there were people whose perception of reality was completely altered. I researched a lot about delusional disorders, and even when I left school, it was something that stayed at the back of my mind,” she stated. 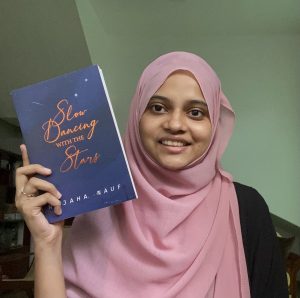 Najaha had an older brother who was born with a congenital condition, resulting in severe health complications, sometimes requiring that he undergo dialysis and spend extensive time in hospitals. Shortly after Najaha completed her schooling, her brother fell severely ill and she was faced by the reality that she would have less time with her brother than she thought. “I grew up knowing that my brother would not be around for as long as we wanted him to be, but this development still ushered in a bleak period in our lives. Many people would see my brother and think that he must be a burden on our family owing to his health, but I think he was the sun in our solar system,” Najaha shared.

Leading up to the demise of her brother, Najaha and her parents would spend all the time that they could with him, even if it meant that they were sitting in hospital waiting rooms for the dialysis to finish. During this time, Najaha started writing letters addressed “Dear You”, and she shared that one day, one of these letters turned out a little different. “I would try to think of life, death, and the world in different ways while I was writing in the waiting rooms of hospitals. One day, I thought, maybe there is somebody out there with a delusional disorder, obsessed with the idea of death, unable to cope with it the way me and my family were able to,” Najaha reminisced.

After returning home that very same day from the hospital, Najaha wrote five more letters, forming the foundation of a story. Over the course of the next three months, she added many more such letters.

With Sri Lanka going into its first lockdown, Najaha shared that she could not bring herself to write anymore letters, because she was away from the hospital setting that had allowed her to explore the thoughts running through her mind, as she wandered from one ward to another, or along corridors, lost in its atmosphere, observing doctors and nurses rushing about. Come April, Najaha lost her older brother, and the author said that the ensuing grief was immensely challenging to cope with, and that she would spend most of her days napping, so that she could escape the pain.

Daring, however, came in the form of Najaha speaking to one of her lecturers in psychology about dealing with grief and discussing delusional disorders. “I think after much introspection, I realised that I spoke to my lecturer because I wanted to make sure I did not have a delusional disorder. Not that I felt that it was wrong to have the disorder itself, but just because I wanted to be sure that what I was experiencing was grief, and not a delusion somehow,” Najaha shared.

Her lecturer advised her to continue working on her story, which she believed would allow Najaha to cope healthily with her grief, and quite possibly help somebody else out there going through a similar experience. Realising that her support system was enabling her to cope with the grief, Najaha dared to write, to allow vulnerability in and support others in the process, and so, Slow Dancing with the Stars took form. 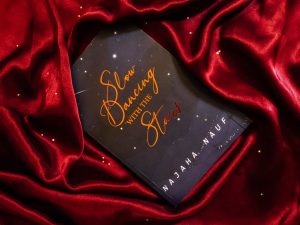 Written in the stars

Talking about how she came to publish her book, Najaha shared that she sent out snippets to her friends who always encouraged her to publish. Her lecturer had also expressed interest in reading the book, should it be published. “I wrote the book in the span of about six months, and it was just that one story that was screaming to be let out. My cousin recommended that I speak to The Jam Fruit Tree Publications. I worked on the draft just once and it was quite rough when I sent it out to Jeremy Muller, who then went about editing the book with me for another two to three months,” Najaha shared.

The author added that while the first edition paperback is available for purchase from The Jam Fruit Tree Publications and herself, the book has had demand from readers spanning several countries, many of whom she has not been able to ship out orders to, due to the prevailing restrictions. In order to allow more coverage, Najaha launched her second edition ebook on 10 October 2021, which is now available online.

Speaking about the cover of her book, Najaha confessed that she shared the ultimate dream of every author – to have their readers decode their work. “The orange-ish bronze tones of the lettering alongside the blue hues of the cover is a stark contrast. The city lights below and the star studded skies above, with three stars accentuated; two burning brightly and one falling, I hope, will give my readers something to think about,” she shared.

To the stars that burn the brightest

Every author has that one line or phrase in their book that remains immortal. It is the one thing that they write that radiates the most warmth, because it contains a piece of the writer’s soul. Najaha’s Slow Dancing with the Stars is no exception and carries an ode to the stars that burn the brightest, and in a way, the hardest.

“Because we have been so strong with all the living we do, that an uncertain death is the greatest calamity we’ll ever face. I think everyone should forgive themselves a little bit more often, a little more willingly. Because the world will go on; you will go on. You may not shine as bright as you used to but you’re burning twice as much. You can’t choose how you go but you can choose how you stay, and I choose to stay, as loudly and as brightly as I can. Until I am dust, until I can start over,” she said.

A Night at the Opera at the Galle Face Hotel

March 12, 2019 byRandev No Comments
The Galle Face Hotel is delighted to host A Night at the Opera in association with Barbara Segal Music with international guest stars Carlos Conde Gonzales and Maestro Peter Crockford.