SLPP and SLFP meet to patch up differences 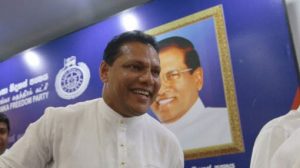 District leaders of the Sri Lanka Podujana Peramuna (SLPP) and Sri Lanka Freedom Party (SLFP) met today (20) to iron out issues faced by the respective party representatives in the constituencies, The Morning learns.

The meeting was focused on discussing the grievances of members of both parties at district level and finding solutions.

SLFP General Secretary, Minister Dayasiri Jayasekera told The Morning that the two parties had discussed how the SLPP and SLFP could work together in local government bodies.

“We discussed how the two parties together could gain control of local government bodies and function as an alliance,” he said.

According to Jayasekera, the district representatives of both parties have been asked to hold joint meetings in their respective constituencies and formulate a working mechanism that would be presented at the next meeting in Colombo.

Covid patients to care centres closest to their homes

May 18, 2021 byNews Admin No Comments
The Ministry of Health has decided to direct Covid-19-infected patients to treatment facilities or intermediate care centres closest to their residences for the necessary treatment, it was announced y

At least 16 injured as lorry rear-ends bus in Wadduwa

November 3, 2022 byNews Admin No Comments
A bus transporting staff members of a garment factory collided with a lorry in the Suduweli Mankada area in Wadduwa yesterday (2).