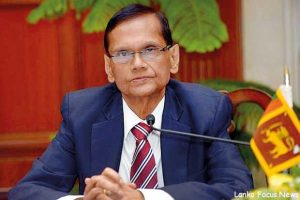 Addressing the media at the Opposition Leader’s Office in Colombo yesterday, SLPP Chairman Prof. G.L Peiris urged the law enforcement authorities to conduct a thorough and impartial investigation into the matter.

In a leaked recording of a telephone conversation made public on Friday, Wickremasinghe is heard expressing regret over the action taken on Avant Garde.

She said that had she known several people would lose their jobs, she would not have taken legal action.

The female voice is also heard saying, “I know how to break the law and make the law”.

“As a public officer I’m not permitted to make public or press statements. Please publish the entire telephone conversation without editing, doctoring, and distorting the contents. Please disclose to the public the name of the minister to whose telephone you called and the reasons why the said minister passed the telephone to me,” she said in her Facebook post addressed to Senadhipathi.

Prof. Peiris told journalists yesterday that the SLPP would contemplate not only civil but, if necessary, criminal proceedings against the officer concerned.

Mahinda as Opposition Leader by next week

December 28, 2018 byRandev No Comments
Former President Mahinda Rajapaksa is to take office as the leader of the opposition by the first week of January 2019, the Sri Lanka Freedom Party claimed.

Rice to be imported from Myanmar, India, and Pakistan