SL’s abysmal fate: THIS IS THE START OF THE END, NOT A TRANSITION 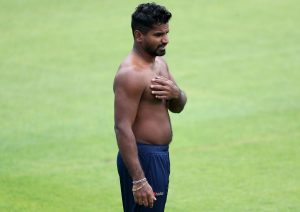 A shirtless Kusal Perera during a training session. Photo Cricinfo

What we are experiencing at the moment are the disastrous outcomes of all the mismanaged socio-economic developments post 1996?

The utter lie the fans are now sick of hearing

“Just not enough runs again. We’re coming up against a really good bowling attack. They’re (England) ranked No. 1 in the world, we’re ranked No. 9, and you can see the difference. We’ve started a journey with a young team and for us it’s about getting better, competing, learning from every game and every experience and getting better and better as we go along.”

There has never been a time when the Sri Lanka national cricket team had failed so miserably like they have now. There were times when the Sri Lanka team used to struggle continuously for a long period of time, mainly away from home. Yet they had always been on a journey where they progressed gradually. 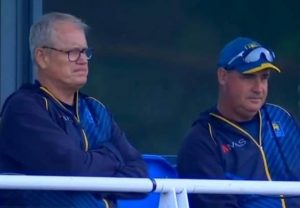 After Saturday’s (26) batting display by Sri Lanka, this photo does not require any caption

Since late 1800s to 1930s or so, the British colonial masters who ruled Ceylon played the game. Then the locals started to take over. The native Ceylonese raised their standards by involving in unofficial matches against England and Australia who stopped over in Colombo to refuel their ships en route to their destination for the Ashes cricket series etc.

Ceylon became an International Cricket Council Associate Member in 1965, a Test nation in 1981, a reasonable force in world cricket both home and away since the early 1990s, and one of the best cricketing nations on all conceivable counts by the dawn of the 21st Century. They maintained that status for the first 15 years of the new millennium.

Identical Sri Lankan style
Sri Lanka not only became world champions of the 1996 50-over World Cup, but they introduced a novel brand of cricket which had an essentially Sri Lanka flavour. It was an extravagant type of approach to the game – a never-say-die approach. They used to fight against any top opposition and whether they ended up winning or losing, Sri Lanka thrilled the crowds, brought honour to the countrymen even in defeat, for the sheer quality of cricket they played.

We are not talking about the 96 team under Arjuna Ranatunga. This essentially Sri Lankan brand had been the same since very early days, perhaps since the day the natives took over the game entirely from the Britishers who introduced it in the island. 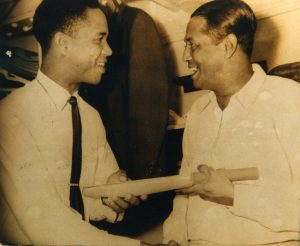 The coincidences
Sri Lanka’s rise in world cricket in the mid 1990s coincided with the rise of the Asian subcontinent, particularly India, in the world cricket industry. It was the first decade of India under an open economic system. It was the time when the global economic forces started to look greedily at the tantalising one-billion Indian market.

It was the time when England’s popularity of cricket started withering too. The administrative and economic epicentre of the game had shifted from the United Kingdom to the Indian Subcontinent. Bangladesh too had entered the fray only to strengthen Asia’s might by the year 2000.

It was a decade when the game needed a new leader other than England and Australia, in the playing field, governance, and economy. And, the game needed a new style to suit the emerging realities of a new digital world – the new world of the computer, mobile phone, and the satellite television.

This new era, with the advent of the above three, required a revival of cricket, which was the main sport and the main source of entertainment and individual national identities in the Subcontinent. It was by far the main vehicle for global commercial giants to reach the highly anticipating India market.

Cometh the hour, cometh the Sri Lankans
Sri Lanka’s experiment against Australia to start batting with explosive Sanath-Kalu combination, in late 1995, came only as a means of finding a new strategy to counter the arrogant and unrelenting Australia in Australia. It was during the 1995-96 Benson & Hedges tri-series. 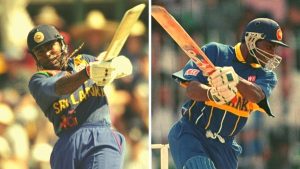 Duleep Mendis, along with Ranatunga and Dav Whatmore, first employed the Sanath-Kalu explosive opening-batting ploy in 1995 in Australia

The Arjuna-Mendis-Whatmore think-tank then rightly understood it was time that they can fight against the Aussies both on-and-off the field and come up trumps. They knew they had the firepower to do so like never before, having in their ranks ones such as Aravinda, Jayasuriya, Vaas, and Muralitharan.

(i) India entering into open economy under Narasimha Rao in 1991, (ii) Mendis asking Sanath and Kalu to go and whack the Aussies over the infield in 1995, and (iii) the Wills World Cup coming to be staged in Asia in 1996… they were three isolate incidents, three phenomena which were not interrelated. Yet the three roads met up in Lahore on one fine night when Sri Lanka won the World Cup, beating the Aussies in the final.

Following generation was fortunate
Their pinch-hitting ploy and the subsequent fairytale win, Jayasuriya emerging as the new Master Blaster of the game, the unorthodox nature of their cricket altogether, and the topsy-turvy journey of Muttiah Muralitharan to the pinnacle of bowling, on the one hand, created a revolution in the sport of cricket.

On the other hand, it brought about, in a broader sense, two parallel developments in the sport: It brought about the transformation the game had wanted to have, to suite the new realities of the digital market forces as well as the shifting of the game’s economic epicentre from England to India.

The next crop of players including Sangakkara, Mahela, Dilshan, Malinga, Kulasekara et al should be considered really fortunate ones to have been able to reap the harvest of such a long and arduous journey that had lasted perhaps over a century. 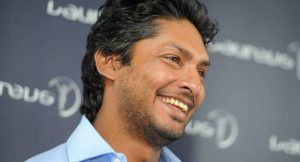 Sangakkara explains the world the possible solutions to our cricket woes. Can’t he implement those solutions practically here, as a member of the present National Sports Council along with its Head Mahela Jayawardene? Ironical

Since 2000s, what we saw was Sri Lanka cricket reaching a totally professional structure where cricketers were to be paid like the way the professional players of other countries were paid. Cricket became, in the last two decades, a profession which is more lucrative and appealing than any other. Even a doctor, engineer, lawyer or a typical politician couldn’t have earned even the half of what a national cricketer could earn per a month.

In addition, they were treated as heroes even when they were not. They were treated as role-models even when they were really not. Sangakkara is a role-model for his sheer sporting achievements and his versatile character. But his influence spilled over to areas like education to good governance where he cannot be counted as an exemplary figure or a role-model. The society was fooled, mainly by the commercial world by projecting Sanga, Mahela et al as those who can preach us on any subject. Their private-life practice never reflected what they actually preached. 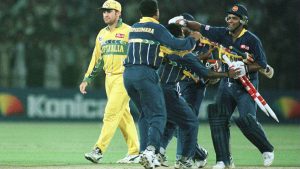 The post-96 generation of Sri Lanka’s cricket made use of their predecessors’ efforts relatively cheaply and reaped the harvest, so to say, without much effort. Then a new social class could enter the sport and represent Sri Lanka. Some say this new generation is one that lacks a surname – Dinesh Chandimal, Suranga Lakmal, Dasun Shanaka etc.

This new intake who were graduated into national ranks needed to be monitored, supervised, disciplinised, and thoroughly nurtured in the right path if Sri Lanka were to continue with the same success rate. Such a thing never happened unfortunately.

It is like a farmer’s son today goes on to earn 15 lakhs a month tomorrow, after receiving his national cricket contract. Doesn’t such a quick transformation beget indiscipline, poor commitment, complacency, undue haughtiness? Then emerged the Gunthilakas and Mendises et al followed by cocaine, night clubs, hit-and-run accidents, rape … (you name it, they have it).

Dissecting Arthur views
Now please see the boxed views of our Head Coach Mickey Arthur after Sri Lanka lost their fourth consecutive T20I series since January 2020 and eighth defeat out of 10 matches during the same period. Arthur’s two-year Sri Lanka contract, including that of his support staff with Batting Coach Grant Flower, started in December 2019.
Who can say that poor Arthur will not be singing the same baila, so to say, after Sri Lanka’s tenth series loss in near future? It is whether shamelessness or hiding behind one’s words, we don’t know. He has flown all that distance, crossing the Indian Ocean, to find out that England is No. 1 and Sri Lanka in No. 9! If this is THE start, what was there last year when he took over. Was it a trailer? A teaser?

And this is not a young team either. In the last match on Thursday (24), the two youngest players (Avishka Fernando and Wanindu Hasaranga) were 23 and Binura Fernando 25. The whole rest is over 26 and three of them are in fact 30 plus – and you still call it a young side begs sincere clarification!

This is not a START of a journey either, as Arthur has put it. This is theoretically the beginning of the END of a journey, a great, great journey. Sadly, this is not a transition too, as many, including Sangakkara, were tend to assume. This deterioration had been quite nakedly evident for nearly six years now. Mind you! Can a transition in cricket last that long?

The game being prostituted 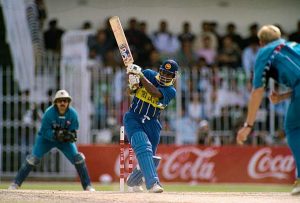 You don’t hide behind words or rhetoric. If you can’t do it, leave it! This is not a time for clowns or cheats as Sri Lanka’s cricket is suffering like never before. They have lost their identity: that tantalising, never-say-die approach. The Sri Lankan people are feeling the pain because of that, as cricket had been their only source of inspiration and satisfaction. Has the game been not prostituted for mere personal gains by individuals creating this outcome?

By looking at the broader picture, which we tried to brief you above, the solutions need to be all-encompassing. It involves on-field development but greatly the point is out of the playing field – with the social, psychological, and commercial spheres.

If an all-involving –past cricketers, politicians, the board, players, selectors, coaches, etc–, and really genuine effort is not going to be made soon, considering this as the LAST chance, Sri Lanka’s cricket will be left to be in ruins. Nobody will be able to revive it. That will be a great sin that all of us will be making, on the part of our future generations, in this magically cricketing nation.

February 2, 2022 byNews Admin No Comments
The organisers of the Indian Premier League (IPL), the Board of Control for Cricket in India (BCCI), has trimmed 1,214 players from its 2022 auction to just 590 yesterday (1), which is considered the