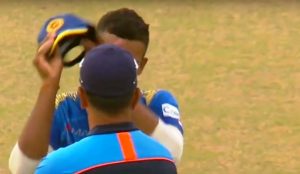 Sri Lanka’s new white-ball Captain Dasun Shanaka praised the two cricket boards, Sri Lanka Cricket (SLC) and the Board of Control for Cricket in India (BCCI), for arranging the T20 cricket series in an hour of difficulty.

“It was a great opportunity for the youngsters,” he said on Wednesday (28) after the second T20I, which Sri Lanka won by four wickets to level the series 1-1.

Speaking later, he had specially acknowledged the Indian team who took a lot of risk and pain to make their bilateral commitment to Sri Lanka, which was a huge boost for Sri Lanka’s cricket.

The six-match white-ball series was originally scheduled for mid last year. Later it was hastily arranged, amid Covid-19 fears, to send a second-string Indian side to Sri Lanka at a time their main team is in England in preparation for their forthcoming Test series.

June 8, 2021 byRevatha No Comments
Memorable events that happened on 8 June

Inter Milan one win away from lifting the Scudetto

May 3, 2021 byRevatha No Comments
Four-horse race for LaLiga title