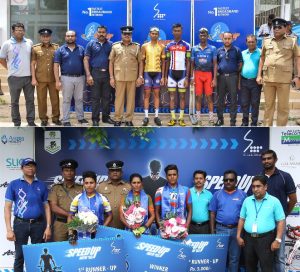 (On top): Winners of the men’s race at Trinco on Friday. (Bottom): The winners of women’s day-1 race at the finish-line in Kurunegala: Winner B.A.S. Dilhani of SL Army, 1st runner-up Ayesha Madhushani of SL Navy, and 2nd runner-up Panchali Sulochana of SL Air Force

The fourth day of the ‘SLT Speedup Cycle Sawariya’ men’s race, which began from Kurunegala, marked its finish at Trincomalee on Friday, 27 September.

The race travelled through Wariyapola, Thambuttegama, Anuradhapura, Medawachchiya, Vavuniya, Kebitigollewa, Morawewa and then reached the finish-line at Trincomalee covering a distance of 241km.

Meanwhile the first day of women’s race reached the finish-line at Kurunegala on the same day. The women’s race began in front of the SLT head office in Colombo and travelled through Peliyagoda, Kiribathgoda, Kadawatha, Nittambuwa, Warakapola, and Polgahawela and reached the end-point at Kurunegala covering a distance of 90km.

‘SLT Speedup Cycle Sawariya’ final day for men’s will start from Trincomalee on Saturday, 28 September and finish at Dambulla while the women’s race will start at Kurunegala to reach the finish-line at Dambulla.

The first-ever competitive cycling event for juniors will also commence on Saturday from Dambulla and travel through Habarana, Kekirawa and back to Dambulla.

December 20, 2020 byNethmi Liyanapathirana No Comments
Sri Lanka is one of the few countries in the world celebrating cricket. We have a great history for cricket that goes past a century. 17th of March 1996 was the day where the cricket world turned..