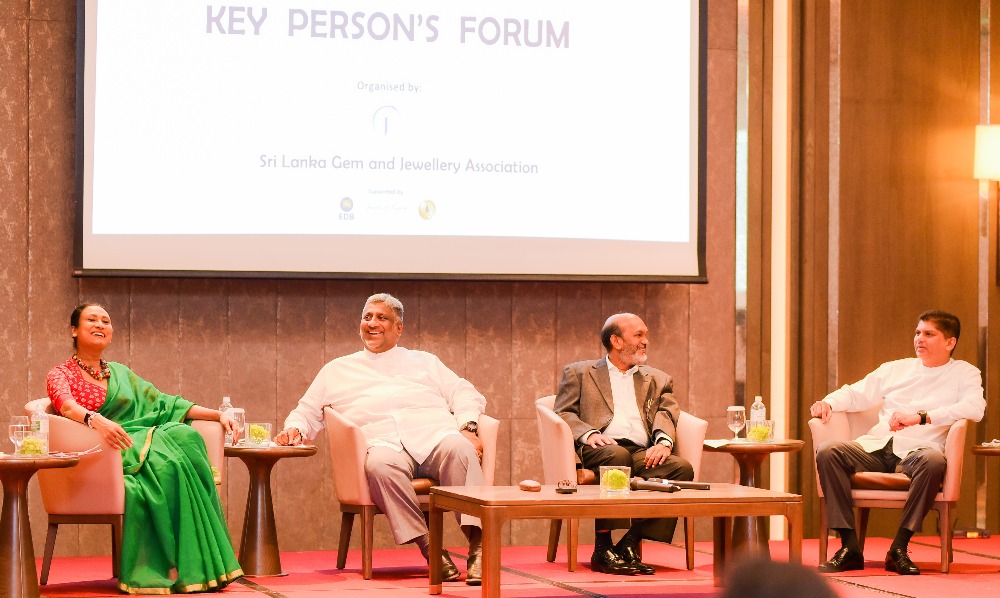 During the second Key Person’s Forum of the Sri Lanka Gem and Jewellery Association (SLGJA), Sri Lanka Tourism Promotion Bureau (SLTPB) Chairperson Kimarli Fernando assured that the gem and jewellery industry would be promoted through the SLTPB in all future campaigns.

She positively emphasised the significant impact that can be achieved through this association. She also spoke of a tourism travel app, currently in the development stages with the SLTPB. Accordingly, she offered to add the names of all the gem and jewellery traders, who are licensed by the authority, on the app, that will help tourists locate the shops as “places to visit”.

The collaboration between the gem and jewellery industry and the tourism sector will be capable of maximising an influx of tourists to the country, with the aim of especially attracting up-market tourists. With the potential to be one of the largest foreign revenue earners, by generating around $ 500 million foreign exchange through the sale of gems and jewellery to foreign travellers, the gem and jewellery industry will be an immense support to uplift the tourism sector.

In his opening remarks, SLGJA Chairman Refai spoke of Sri Lanka’s rich heritage of producing high-quality gemstones and said it is a unique opportunity to promote and market gemstones to the world. “A concentrated marketing campaign together with the Sri Lanka Tourism Development Authority would greatly benefit the promotion of the gem and jewellery trade. This will encourage more tourists to visit our island to experience our gem mines that are set against the backdrop of the beautiful paddy and mountain landscapes. The gem and jewellery industry in Sri Lanka spans over centuries in history with able miners, talented craftspeople, and astute traders carrying the treasures of the land beyond oceans, and bringing in much wealth back to the country.” As shopping is a key feature of any tourist experience, allying the Ceylon sapphire as part of Sri Lanka’s tourism campaigns would be an ideal way to increase tourism, especially upmarket tourists looking to spend.

Speaking at the event, Minister Ranatunga acknowledged the need to marry the efforts of the two industries, saying: “It is our responsibility to protect and expand the brand recognition we have for our gem and jewellery industry.” He iterated that the Ministry of Tourism is positive about drawing the necessary action plans to implement campaigns where tourism will call attention to the gem and jewellery sector as part of promoting the destination.

The possibility of holding the Facets International Gem and Jewellery Show in January of 2022, as addressed by Altaf Iqbal, the Chairman of aforementioned show, was also discussed. As the main event that draws a large number of foreign buyers, Facets is one of the campaigns that can truly leverage tourism to the country. The need for further promotion of Sri Lanka as a tourist destination with the inclusion of the gem and jewellery associations in the promotional campaigns, the increase in foreign exchange earnings, and the overall quarantine process for tourists coming into the country were also highlighted.

Having agreed upon the fact that the promotion of Sri Lanka as a tourist destination is severely lacking, the potential for the gem and jewellery industry to be one of Sri Lanka’s largest foreign exchange earners, with the implementation of well thought out policies that are adapted in consultation/partnership with the trade, was acknowledged.

July 4, 2021 byNews Admin No Comments
The Generalised Scheme of Preferences (GSP) provided by Japan for Sri Lanka that was under review for extension according to the 2020 Annual Report of the Central Bank of Sri Lanka, was extended for a

July 8, 2021 byNews Admin No Comments
In a strategic move to create a robust governance structure, transform, and steer the company into the next phase of development, Ambeon Holdings PLC announced the appointment of Dr. Sajeeva Narangoda