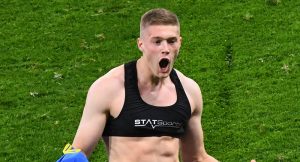 In the Euro 2020 pre-quarterfinals against Sweden, Artem Dovbyk of Ukraine stepped up to score a goal when scores were 1-1 sparking wild celebrations. The social media went into a meltdown that moment as the player looked as if he was wearing a sports “bra”!

When any sportsperson who scores the winning shot in any sport, he or she will be remembered for a long time by the fans of that sports team. And in the field of football, most people consider the European Championship or, as in the case of the current tournament that is going on at the moment, Euro 2020, second only to the World Cup itself.

It is watched not just by the general public of those countries themselves but even by football fans of many other countries. It is no different in Sri Lanka where the football fans have flocked to their television sets to watch the matches.

Last week in that tournament, the pre-quarterfinal rounds were played. And one of the last matches in that round was between Sweden and Ukraine. With the match deadlocked at 1-1 even in extra time, penalties were on the cards. That is when Ukraine’s Artem Dovbyk stepped up to score a goal sparking wild celebrations. Dovbyk, 24, nodded home from close range, just when the last-16 clash looked set to be decided on penalties, and wheeled away in wild celebration while quickly whipping his top off.

But instead of commenting on the goal and its opportunistic nature and the importance of it, the social media of the world went into meltdown. This is because of the fact that when Dovbyk whipped his top off in celebration he was wearing another contraption underneath his football jersey. And social media users, as most of them are wont to do, went into meltdown commenting on the fact that the footballer was wearing a sports “bra”. He could be seen wearing a crop-top vest, which was adorned with the STATSports logo, and the surprising sight led to viewers quickly taking to ‘Twitter’ to share their bemusement.

Twitter reaction whilst it was not nasty, certainly seemed to have divided opinions about what he was wearing underneath the jersey. “Why is the Ukraine striker Dovbyk wearing a sports bra?”, one user questioned. Another wrote: “Dovbyk is the first professional male athlete I’ve ever seen who wears a sports bra.” In comical fashion, a third chose to adopt the classic chant, “He scores when he wants for their own purposes, and changed the lyrics to: He scores in a bra, he scores in a braaaaa. Artem Dovbyk, he scores in a bra.”

Another posted, “Artem Dovbyk has just immortalized himself by scoring the biggest goal in Ukrainian history, and immediately whipping his shirt off to reveal a sports bra. Just brilliant,” Another said: “Dovbyk scores the winner, wheels the shirt off to reveal what can only be described as a sports bra… there are no words.” Perfectly summing up the feeling of confusion, a sixth user said: “Still not sure about Dovbyk’s sports bra.” Opinions seemed to be divided and everyone was wondering about the garment being worn by this talented footballer. Even in his home country of Ukraine, curiosity was high as to exactly what their latest hero was wearing.

It was in fact a GPS tracking vest. The device is one of the in-demand products from a GPS monitoring and analysis company, whose services are used by a variety of national teams as well as Premier League clubs to help improve performance. Players wearing the vests enable their coaches to track certain statistics, including speed, acceleration, heart rate and distance covered. This allows clubs to tailor the sessions to get the best out of their squad. This is one of the latest sporting gadgets used by the high performance players so that they can help their trainers to come up with specialised training regimens.

But, most importantly, it is easy to use as it is quite easy to download the data and is easy to use for analysis. Handily, any information gathered from this technology can be streamed to a phone, tablet, or smart-watch, making for easy reading for staff who will then decide what their stars should or shouldn’t be doing. But crucially this didn’t appear to be common knowledge, however, judging by the shocked reaction from a number of people as shown from the above posts. Social media in its haste seemed to have got it wrong, and not for the first time either.

STATSports company is the pioneer in coming up with this technology. And since being founded in 2007, they have gone on to work with a host of elite teams around the world and help aid their sports science departments. “People are able to take that data during games and make decisions,” Co-founder Sean O’Connor told ‘The Times’ last year. Speaking further he said, “What that allows you to do is build a profile on a player. You expect a player to do X, Y, Z in training and games. When they start to move away from those norms, it can be for good or bad reasons.”

Explaining this concept further he said, “If they are in a training session and there is 25 minutes left and they have gone way past what you normally expect them to do, then you can make a call to either taper it off or take them in early. It’s the same concept in a game as well. If the Manager is deciding between two players to replace, he could ask his coach, “what feedback can you give, physically”. With famous football clubs such as Manchester United, Liverpool, and Arsenal using them, it looks as if it is an invention that could totally change the approach to sporting fitness.

Costing only about £ 200, or a little more than 50,000 Sri Lankan rupees, this should be a piece of equipment that Sri Lankan coaches training elite athletes should definitely be interested in. if Sri Lanka is to reach the top in international competition, we will need every bit of an advantage that we can get. And this piece of equipment certainly seems to fit the bill.

October 5, 2021 byRevatha No Comments
The Lanka Lions left on Monday for the ultimate prize in T20 cricket