September 5, 2021 by Revatha No Comments 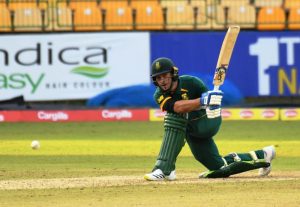 South Africa level series with a 67-run win over Sri Lanka, according to the D/L Method in the second One-Day International (ODI) here at the R. Premadasa Stadium, Colombo yesterday (4). Visitors’ stand-in Skipper Keshav Maharaj won the toss and elected to bat first, with the game revised to 47 overs per a side after a rain delay. They posted 283 runs with a century from Janneman Malan. In response, Sri Lanka got a revised target of 265 in 41 overs, following a second rain delay. Yet the hosts never in the game as Tabraiz Shamsi’s five-for cleaned up the host for just 197, to secure them the win to level series at 1-1.

There were few notable performances in the game: Charith Asalanka’s classy 77, Kagiso Rabada’s fiery opening spell and Shamzi’s career-best figures 5/49. However, all this fell behind Malan’s third ODI century. His eight-match ODI career has already produced three centuries, two half-centuries, with a highest-score of 177 not out. All of this after ‘a golden duck’ in his first match too! He boasts a staggering average of 101.2 and his urgency at the top was vital for the Proteas to not only lay the foundation, but also to post a winning total.

Sri Lanka got off to the worst possible start in their run chase, losing 3/19. Once in-form Avishka Fernando was caught at slips, the two Bhanuka’s followed shortly after. Bhanuka Rajapaksa was bounced out by Rabada and Minod Bhanuka nicked one behind. Asalanka and Dhananjaya de Silva added some respite with a 42-run partnership. But a second successful review from Maharaj found de Silva caught down the leg side off Shamzi to break the partnership. After some consolidation from Asalanka and Skipper Dasun Shanaka, a second rain delay revised the target to 265 off 41 overs. The pair was set after adding 64 runs. However, the revised target warranted quick runs and Shanaka lost his wicket trying to clear the boundary. Ultimately, Sri Lanka succumbed to 197 despite a spirited 36 by Chamika Karunaratne in the death overs.

Shanaka opted for a pace-spin combo, with Dushmantha Chameera and Praveen Jayawickrama, to open the bowling. The experiment didn’t work as both Malan and Aiden Markram laid a steady platform for the Proteas. The visitors managed 50 in the first power-play, for the loss of one wicket. Malan, together with Reeza Hendricks added 96 for the second wicket with both reaching half-centuries in quick succession. Despite losing partners at the other end, Malan carried on and reached his third ODI century. Along with Malan’s century, Heinrich Klassen added 43 off 27 to push South Africa to 283.

Sri Lanka was behind their required run-rate from the beginning of the chase. With the scoreboard pressure, the young side’s inexperience was exposed. The Proteas were helped on to this winnings target, mainly thanks to Malan’s hundred. But the turning point of the game was his partnership with Klassen. The pair added 86 in just 54 deliveries to shift the momentum in their favour. The Proteas went on top to add 97 runs off the last ten over, with 58 runs coming in the last 30 deliveries.

Sri Lankans would be disappointing looking back at their fielding performance in the match. There was certain lack of intensity in the ground fielding. The dropped catch from Asalanka of Malan cost 16 runs for the hosts, and all together they leaked at least 25 runs in the field.

The Proteas top-order did well against the Sri Lankan spinners. They used to sweep to good effect which, at most times, caused headaches for Skipper Shanaka. It was a learning curve for Wanindu Hasaranga and Jayawickrama on how to counter it, but they struggled. It was indeed a great presentation on how to play spin, one which Sri Lankan batters should watch and learn.

Dasun’s captaincy continued to lack a bit of match awareness. Like in the first ODI, he kept opting for Akila Dananjaya despite him been expensive. His reluctance to use, De Silva, Karunaratne, and Chameera proved costly for Sri Lanka.

Shanaka is yet to prove himself as a reliable batsman in the middle-order and yesterday’s match wasn’t any different. Just when the team needed a big innings from the Captain, he lost his wicket to Shamzi right after the rain delay.

Back-to-back ducks for Bhanuka Rajapaksa means there is huge doubt over his position, at least in ODIs. Minod Bhanuka will also be under pressure with the veteran Dinesh Chandimal looming in the dug-out, waiting for an opportunity.

The third and deciding ODI will be played on Tuesday, 7 September here at the R. Premadasa. It will be another day-night game scheduled to start at 2.30 p.m. 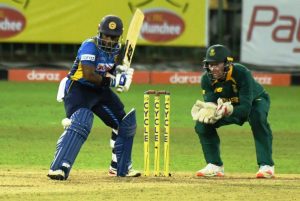 Wiaan Mulder not out 5

Kagiso Rabada not out 9

Praveen Jayawickrama not out 1

Player of the Match: Janneman Malan

July 9, 2021 byRevatha No Comments
Says his Captain is MS Dhoni