Of the fourteen wickets to fall under cloudy skies, on a green-top in Christchurch, Suranga Lakmal claimed five, and provided his team a meagre edge in what promises to be another absorbing Test. New Zealand got to 178 having been put into bat – 108 of those runs coming during an adventurous seventh-wicket stand between Tim Southee and B. J. Watling. 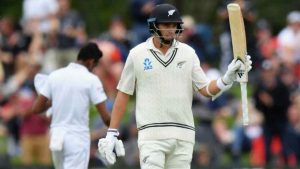 ‘Sixer’ Southee was at it again, hurting Sri Lanka this time

Southee, the day’s only half-centurion with the bat, then delivered a searing swing-bowling spell when Sri Lanka went to bat early in the second innings, uprooting the opposition’s top three inside his first five overs. Having been shepherded to stumps by the solid Angelo Mathews, Sri Lanka are still in the hunt for a first-innings lead, slim though it might be. Equally, with Sri Lanka still 90 runs still short of New Zealand’s score, and with the pitch still seaming, the hosts will hope they can run through the remainder of the middle-order when play resumes on day two, as well.

Although Southee can stake a claim to being the day’s most effective performer, Lakmal will perhaps feel that it was his first-session effort that set the tone for Boxing Day. Taking the new ball at the City End, Lakmal bowled unchanged right through to lunch, then delivered more overs after the break, to make it an epic 16-over spell. Since 2001, from when ball-by-ball records exist, no seam bowler has delivered a longer new-ball spell. His returns from that spell were 4 for 42, and at the end of the innings, he had collected a career-best 5 for 54.

It was relentless control, and delicious seam movement in either direction that envenomed him, and his wicket-balls seemed to get better and better through that first session, at the end of which Sri Lanka had the opposition four down.

Lakmal’s first victim, Jeet Raval, was out to what was actually a modest delivery, though Lakmal’s accuracy in the preceding overs perhaps built the pressure that produced that dismissal. Spotting a fuller delivery on middle and leg, Raval attempted to flick to leg, but closed the bat’s face early, and a leading edge floated out to mid-off where Dinesh Chandimal took a simple catch.

In his next over, coming from around the wicket at Tom Latham, Lakmal got one to straighten off the deck – the resultant edge snaffled low by a tumbling Kusal Mendis at second slip. The ball that got Kane Williamson came after several tight, tense overs, during which New Zealand’s usually-fluent captain could not score off the first 14 balls he faced.

His 18th ball, from Lakmal, was angled in from wide of the crease, and straightened again, to take a thin edge to jubilant wicketkeeper Niroshan Dickwella. A full house was in at Hagley Oval for Boxing Day, but of all their hushes in the morning, this dismissal was met with an almost iron-clad silence.

The best dismissal of the day so far, however, was still to come. Having moved it away from the two previous left-handers he had dismissed, Lakmal jagged one deviously back at Henry Nicholls, who attempted a flowing drive, but got nowhere near the ball, which connived between bat and pad to ping the top of off stump. Watling’s first act had been a play-and-miss at Lakmal too.

It was just as Lakmal’s marathon spell was ending that Southee’s first major contribution of the day came. Having arrived after Ross Taylor was run out backing up too far, and Colin de Grandhomme had holed out playing an ill-advised hook to a Lahiru Kumara short ball, Southee began swinging his bat early in his innings. He didn’t exactly connect well, but he connected well-enough – his 68 off 65 balls populated with mis-hit sixes over fine leg, edges through or over the slips, hoicks falling into space, plus a smaller selection of shots that he actually meant to play.

New Zealand had been en route to a double-figure total when he arrived at the crease, at 64 for 6, but within the space of a few overs Southee had them skimming past 100. Kumara and Dushmantha Chameera – both bowling at over 140kph – repeatedly tried to bounce Southee out, but the top edges kept sailing over the boundary behind square on the leg-side. Watling was watchful to begin with, but ramped up his aggression once Southee got into the swing of things. He scored most heavily off the wider short balls Chameera and Kumara sent at him, hitting several boundaries behind square on the off side.

Southee eventually took one risk too many, and was caught spectacularly at midwicket by Danushka Gunathilaka to give off-spinner Dilruwan Perera his 150th Test wicket in his 36th Test. He is the equal-fastest Sri Lankan to the milestone alongside Muttiah Muralitharan. New Zealand’s tail proceeded to collapse thereafter, the last four wickets falling for six runs in the space of 16 deliveries.

As expected, though, Southee and Trent Boult made New Zealand’s total of 178 seem competitive in their opening spells, during which they had the ball hooping and jagging viciously. Southee had Dimuth Karunaratne caught at gully, aiming a drive through mid on. Dinesh Chandimal, having moved up to No. 3, was out shortly after, feathering Southee through to Watling. Gunathilaka then collected his third single-figure score of the series, when he hooked Southee into the hands of Jeet Raval at deep square leg.

Kusal Mendis defied the frontline quicks, but fell to a loose drive against the bowling of Colin de Grandhomme. Only Mathews, Sri Lanka’s best batsman of the series, actually seemed to play himself in on this pitch, producing a range of assured drives through the course of his 64 balls at the crease. He went to stumps at 24 having survived a close lbw shout and subsequent DRS review off the last ball of the day.

Pallekele “green top” turns out to be a “flat top”!

April 25, 2021 byRevatha No Comments
SL named three pacies for the Test hoping the greenish pitch will assist them!