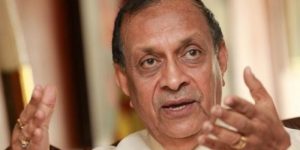 Speaker’s Media Unit today (26) refuted claims that the Speaker Karu Jayasuriya was resigning from his post.

Several newspapers and social media posts had stated that the Speaker would resign from his post if an anti-democratic and illegal incident arose, such as the 26th October 2018 event, where a new Prime Minister was sworn in without the majority vote of the parliament.

The Speaker’s Media Unit said the news reports were baseless and had not cited any source.

“The Speaker is firmly in the position that the Parliament should not hesitate to take the maximum measures against any action that is contrary to Parliamentary democracy”, the Speaker’s Media Unit said.

“The above news item appears to be mere speculation from the respective media outlets that have published the article.” The speaker’s Media Unit said.

July 27, 2021 byNews Admin No Comments
In the context of the deepening global economic crisis, the country’s foreign exchange (forex) crisis is not improving. The slight increase in exports has been undermined by increased imports, especia

December 26, 2021 byAazam Ameen No Comments
Some members of the governing Sri Lanka Podujana Peramuna (SLPP) seem to be blaming the current crises faced by the Government, as well as its shortcomings, on the Government’s allied organisations su