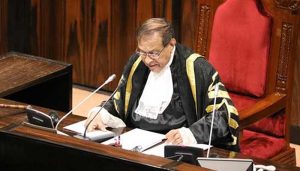 The Police are investigating allegations made by State Minister Ranjan Ramanayake that some Parliamentarians use cocaine.

Speaker Karu Jayasuriya told Parliament yesterday that IGP Pujith Jayasundara had informed him that an investigation had been launched.
Several Parliamentarians raised concerns today that Ramanayake continues to make the allegations in the media without submitting evidence.

The United National Party (UNP) had conducted its own investigations into the claims.

Jayasuriya said that he will advise the State Minister not to make public comments on the allegations without submitting evidence to back the claims.

November 30, 2020 byNethmi Liyanapathirana No Comments
Sri Lanka and the Maldives have discussed enhancing security co-operation between the two countries to prevent drug trafficking and terrorist and extremist activities, the Prime Minister’s Office said