By Ranjika Perera at the R. Premadasa Stadium 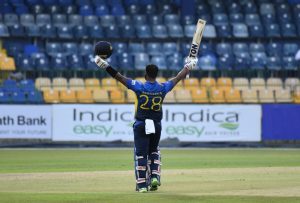 Sri Lanka beat the touring South Africans by a narrow margin of 14 runs in the first One-Day International at the R. Premadasa Stadium,Colombo yesterday (2). Dasun Shanaka won the toss and elected to bat first. A century from Avishka Fernando and quick-fire 72 from Charith Asalanka carried Sri Lanka to 300. South Africa fought till the very end. But despite being on par with the required run-rate for most parts of the game, they fell short in the end. Sri Lanka thus went 1-0 up in the three-match series, and most importantly, moved to the eighth spot, with 32 points, in the International Cricket Council (ICC) Men’s Cricket World Cup 2023 Super League.

The “fitness-first” approach from Sri Lanka Head Coach Mickey Arthur had a lot of criticism from the fans. But it clearly has helped Avishka Fernando. He was known for his big hitting, but he has now become an accumulator. His century, third of his career, proved that and it laid the foundation for the hosts to build on. It was also highlighted in Asalanka’s knock and on the field, Sri Lanka showed high intensity throughout their innings.

At the beginning, the two South African openers looked at ease against Chamika Karunaratne and Dushmantha Chameera. Dasun Shanaka was forced to bring Wanindu Hasaranga to stop the run flow and he did exactly that with the prize wicket of Janneman Malan. However, Aiden Markram, joined by Captain Temba Bavuma, built a steady partnership with Markram bringing his half-century in just 49 balls, with three sixes. The pair added 106 before Bavuma was forced off the field after he was hit on the hand by a fielder’s throw. Markram was the only remaining hope for the visitors, but once he was gone, they lost the momentum. They needed 90 off the last ten overs with Rassie van der Dussen being set in the middle. He and Henrich Klassen fought hard but Sri Lanka managed to restrict them to 284 in the end.

Sri Lanka started off steadily with both openers unshaken by the extra pace and bounce of Kagiso Rabada and Anrich Nortje. The pitch played its part too; the ball sat up nicely, no matter how much the two seamers bent their backs. After putting up a half-century stand, Minod Bhanuka gifted his wicket away and Bhanuka Rajapaksa followed without troubling the scorers. Dhananjaya de Silva and Fernando consolidated for the hosts with a solid partnership of 79 runs. Once de Silva was dismissed, Fernando and Asalanka up the ante, adding 97 off 71 deliveries. Ultimately, Sri Lanka reached 300 in their 50 overs, with Fernando top-scoring with 118 and Asalanka adding a brisk 72.

A key phase in Sri Lanka’s innings was the partnership between Fernando and Asalanka. The latter was busy in the crease, and it helped Fernando build his innings. The pair gave the much-needed impetus to the innings in the middle overs. Asalanka’s 72, his second fifty in ODIs, was vital as the lower middle-order failed to contribute well. In response, South Africa were sitting comfortably at 155/1 at the 28th overs. That was when Bavuma was forced off the field and two overs later, Hasaranga’s stunning catch sent Markram packing just four runs short of his maiden ODI century. Sri Lanka got the opening then and tightened the screws to shift the momentum in their favour.

There was much hype about the pace of Rabada and Nortje. Not to forget the spin threat of Tabraiz Shamsi, but the unlikely hero for the visitors was Keshav Maharaj. His spell of 30/ 2 had the only maiden over of the innings and he was the only bowler to not concede a boundary. The visitors had a few positives in their batting as well, especially in Markram and van der Dussen who almost got them over the line.

This was the first time Sri Lanka reached 300 in an ODI since March 2020. Last time, it was against West Indies in Pallekelle, 12 innings ago. Incidentally, Avishka’s 118 is the highest score by a Sri Lankan opener against South Africa at home.

It was looking ominous for Sri Lanka when the two Bhanuka’s fell in a short space. Especially, Rajapaksha who fell to a simple trap set by Maharaj. He brought in mid-on and slowed down the pace expecting Rajapaksa to go big. He tried his luck only to find deep mid-wicket and walked back for naught. His lack of ability to adjust his game according to the format will be a worrying factor for the lions. Shanaka’s captaincy was once again questionable when he kept choosing Dananjaya, despite him going for plenty. But he was saved from scrutiny, when van der Dussen was bowled around the legs in Dananjaya’s last over.

The two teams will meet again on Saturday (4) for the second ODI at the R. Premadasa Stadium. It will be another day-night match, scheduled to begin at 2.30 p.m.

Avishka Fernando b Phehlukwayo b Shamsi 118

Chamika Karunarathne not out 5

Did not bat: Praveen Jayawickrama

Kagiso Rabada not out 13

Keshav Maharaj not out 0