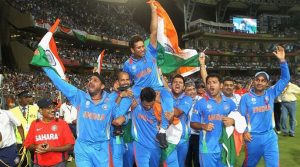 Aluthgamage alleged yesterday that Sri Lanka should have won the final. He said that the game was fixed resulting in India coming out victorious under the captaincy of MS Dhoni.

Mahela Jayawardena, who was part of the 2011 World Cup final Sri Lanka team, however, rubbished the claims.

“Is the elections around the corner? Looks like the circus has started. names and evidence?” Jayawardena tweeted.

Train services on Main Line limited due to sinkhole

November 14, 2021 byAazam Ameen No Comments
Train services on the Main Line have been limited to Veyangoda due to a sinkhole under a section of the rail track near the Wijaya Rajadahana Railway Station, caused by extreme weather conditions.

Govt. announces financial aid for all families as a token of appreciation

December 16, 2020 byLahiru Pothmulla No Comments
The government has decided to provide supplementary financial facilities as a token of appreciation to the people for the contribution they have made during distressed times, the President’s Media Div