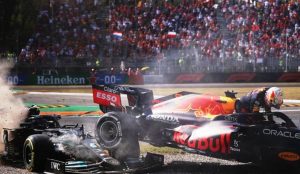 McLaren’s Daniel Ricciardo won the Italian Grand Prix yesterday (12) after a frightening crash between title rivals Lewis Hamilton and Max Verstappen. Red Bull’s Verstappen flipped up beside Hamilton as the pair battled for position, the rear of Verstappen’s car landing on Hamilton’s Mercedes, the halo head protection device possibly saving the seven-time champion from injury. Both retired, beached in the gravel, meaning Verstappen remains five ahead of Hamilton in the title race. Ricciardo’s British team-mate Lando Norris was second after a brilliant late overtake, handing the team a first one-two since the 2010 Canadian Grand Prix and their first victory in nearly a decade. Ricciardo screamed, according to BBC, over team radio as he crossed the line: “Whaaaaaaaaaaaaaaaaaaa! Yes! For anyone who thought I left, I never left. Thanks guys.”

The South American Football Confederation (CONMEBOL) has outlined its opposition to the proposal to hold the FIFA World Cup every two years, despite having previously called for the idea to be explored. FIFA green-lighted a study on hosting World Cups every two years at its Congress in May following a proposal from Saudi Arabia, which has aligned itself closely with FIFA President Gianni Infantino. The controversial plans have been backed by the African Football Confederation and several countries in Asia, while the South American Football Confederation asked FIFA to stage its flagship event every two years as far back as 2018. FIFA’s chief of global development Arsène Wenger is among those to have supported the idea and has led a technical advisory group meeting in Qatar, which has seen a series of former players from across the world support the proposal.

Pakistan’s three-match home ODI series against New Zealand, which begins on Friday (17) in Rawalpindi, will not count towards the International Cricket Council (ICC) World Cup Super League, and will instead be played as a standalone bilateral series. The Boards of the two countries agreed to this change of status due to the non-availability of the Decision Review System (DRS) for the series.

May 15, 2021 byRevatha No Comments
Pep Guardiola added yet another trophy to his cabinet