Any sport has four main aspects to it. They are technical, tactical, physical, and mental aspects. In most cases the first three of these aspects namely, technical, tactical and physical aspects have been very well trained by almost all of the top athletes in the world for quite some time.

Whereas the last aspect, the mental aspect, was one which had not been so well trained or popular with the sport personalities and teams in the past.

But when considering the fact that there is a popular belief that “80% of any top sport is mental” this is a highly bewildering state of affairs.

But in fact, this particular lapse has been changing quite speedily in the past decade or two. Specialised “mind trainers” have been hired by most of the top players and the teams. And not only that sometimes after major victories at sporting events, coaches and players have not been shy to thank these mind trainers and highlight them for their contributions. This is quite a refreshing change from the attitude of the past where it was considered that even if someone was doing some work with a mind trainer it had to be done secretly.

The problematic fact to training the mental aspect of any sport is the fact that, unlike the other aspects of any sport, this aspect is extremely hard to train as a group. This is self explanatory since individual players would have different needs in terms of mind training. Therefore, these sessions mostly need to be on a “one to one” basis. This difficulty is quite apart from the fact that it would take some time for any trainer to “bond” with a player and to get the player to open up fully regarding any “insecurities” that the player has to divulge an outsider. 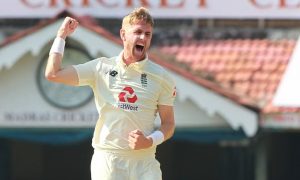 Olly Stone might not be a household name yet. He might not be known even to some fans who follow his chosen sport of cricket. But he emerged from a catalogue of injuries to claim match figures of four for 68 in the second match of the series defeat by India recently. He impressed with his sustained hostility in unhelpful conditions although ultimately England was not successful. And he was very quick to admit and credit that he had been working with such a mind trainer and that he had turned to hypnotherapy to overcome his injury woes.

“With my battles with injury, I’ve worked quite hard on the mental side of the game, just in terms of being able to relax. I’ve always enjoyed playing but you work so hard to get fit and then when you get out there and stuff doesn’t go your way you can feel in a negative state,” said Stone. “Also, there are times on the field when the beans are going and you get in the battle as a fast bowler, then you lose that concentration and don’t stick to what has worked for you in the past. So being able to go out on the pitch and treat an international as any other game rather than big it up is important” he further elaborated.

He said that he had started working with Peter Marshall last year. In fact, he went onto say that not only does he do personal sessions but that even when he is in the “bubble” of the England cricket team he does these sessions sometimes using the zoom technology. In fact, according to him he does weekly sessions. His explanations about these sessions are quite illuminating and thought provoking.

“I have sessions in which I just chill out for a half-hour and others which are more cricket-focused, in which we go through a script of scenarios around how it feels when you bowl your best ball. So, when you arrive at the top of your mark for the first time, it doesn’t feel like it’s the start of your spell but your third or fourth over,’ he said. “I feel it’s something that’s helped a lot so it would be stupid to throw it away now, just because I have had a winter of consistent cricket. It would be wrong for me to think that I’ve nailed everything.”

A lot to live up to

Hailing from the county of Warwickshire, he is quite aware that he has a lot to live up to as an England fast bowler. After all, it is the same county that produced the former England Captain and the late great fast bowler Bob Willis. Like the late Willis, the newest England paceman out of Edgbaston has turned to hypnotherapy to prepare him for matches. And he is fast in his belief that the benefits of those particular actions could be recognized in that impressive second Test appearance of his career in Chennai over the winter.

In most cases if this story was told by someone other than a sports personality who has created genuine excitement among the English cricket followers, this might have been the subject of ridicule. But because it has been told by Olly Stone and that too, on a well known forum, it will be taken seriously around the sporting world. Credit to this young man for being brave enough to highlight an area which he feels genuinely helped him to better his performances. This should give some pause, as well as some food for thought, to some of Sri Lanka’s top sports personalities as well. After all, if it will help them to better their performances there is no harm in giving it a try.

August 13, 2020 byTSM Web Desk No Comments
As The Morning Sports reported on Monday (10), it was none other than Namal Rajapaksa who was sworn in as the new Minister of Youth Affairs and Sports yesterday (12).