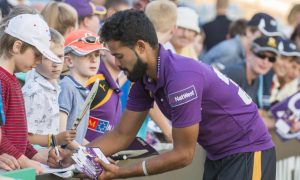 Azeem Rafiq has been presented with the chance to share his experiences of racism at Yorkshire when the Digital, Culture, Media, and Sport (DCMS) parliamentary select committee addresses the crisis earlier this month. Photo courtesy Allan McKenzie

The Yorkshire County Cricket Club (YCCC) is the most successful cricket club in the English county cricket championship. It has a rich heritage and a past that Yorkshire cricket supporters can truly be proud of.

It has produced a number of England cricket Captains. The grittiness of the Yorkshire cricketers is legendary. Geoff Boycott, one of the most successful Test batsmen the world has seen as well as Michael Vaughan, the Ashes-winning England Captain, are both from that county.

But recently it has become famous and well known for a totally different and an unwanted reason.

Azeem Rafiq’s complaints of racism, and not just racism but systematic racism, against the YCCC were addressed in this column a few weeks back. At the end of the column, I finished with the notion that if the report that Yorkshire themselves had commissioned was made public, it should go a long way to clearing things up.

Well, the report has now come out and, no wonder, the club did not want it to become public. In that report, Vaughan, a former England batsman, as well as even some Coaches are implicated. It really has turned out into an unholy mess at the moment.

The problem is that Rafiq is himself no ordinary player. He is a former England Under-19 Captain as well as a former county Captain. Therefore, his allegations should have been treated way more seriously than they have been at the moment.

Rafiq was left to twist in the wind after he first told Yorkshire about the bullying and racism he had been subjected to and then made his grievances public 15 months ago. His experience fits the template of other sportsmen and women who have made similar allegations.

They are made to feel like the offenders. “Pour encourager les autres”, presumably. That was evident in microcosm when it was revealed that the panel appointed to investigate Rafiq’s allegations had suggested Rafiq himself might face sanction for exchanges in which he referred to his team-mate, Gary Ballance, who was born in Zimbabwe, as ‘Zimbo’.

The above mentioned Ballance is alleged to have called Rafiq, a “P…i”, a blatantly racist term. His explanation was less than satisfactory to most people, especially because of the fact that he has admitted using that term.

And, of course, the ‘Zimbo’ revelation released a stream of putrid false equivalence that claimed one was as bad as the other. That is quite evidently not the case. ‘Zimbo’ is the equivalent of calling an Australian an ‘Aussie’. “P…i” is one of the oldest and most pejorative racial epithets in the world. The two has no equations whatsoever.

So many of the recollections of cricketers of Asian heritage growing up in Yorkshire in the 1970s and 80s, and beyond, have revolved around the “ghettoization” of cricket there and how players were effectively barred from white-dominated clubs as if it were some form of unspoken apartheid.

The ‘Born in Yorkshire’ qualification was in effect until it was removed in 1992 but the mishandling of the Rafiq case has made it feel as though discrimination is still ingrained. Therefore, the club has a lot to answer for, in terms of its handling of race relations and the racist allegations.

It is probably made even worse by the fact that Michael Vaughan is also implicated in this episode. But he wrote a column which read as follows.

In a column for The Daily Telegraph, Vaughan admitted that he was the former player implicated in the investigation into Rafiq’s allegations of institutional racism at Yorkshire but “completely and categorically” denied the charges and vowed to “fight” to clear his name.

Vaughan, who represented the county from 1991 until his retirement in 2009, apparently told a group of Asian players, including Rafiq, “Too many of you lot, we need to do something about it.”

“I completely and categorically deny that I ever said those words. I have nothing to hide. The ‘you lot’ comment never happened,” the 2005 Ashes-winning captain wrote in the said column.

But Naved Rana, the professional player for Yorkshire at the time of the alleged comments, has a different recollection. Naved said: “Yes, yes; it’s true but he (Vaughan) has denied it. I’m very shocked about that. It’s true what Rafiq has alleged. He (Vaughan) was there. I was there and he used those words and he’s denied it.

“He definitely said it, I’m sure. I was really shocked why is he denying these things? He was a senior player who played for England as well and he’s a very responsible man. But he’s denying it. Rafiq is right. That’s why I’m backing him. He’s right. I’m not thinking, ‘Oh I’m Asian, Rafiq’s also Asian, so I’ll back him’. No, I’m telling you the truth.”

With sponsors walking away from the club and club officials resigning, and ministers and members of parliament expressing their disgust, this scandal looks as if it has lots of legs. This is a sorry state of affairs. The sooner they sort out this mess, it is good for Yorkshire as well as for cricket itself.

October 14, 2019 byRevatha No Comments
Zimbabwe and Nepal have been readmitted as ICC Members following the conclusion of the ICC Board meetings in Dubai on Monday

February 12, 2021 byRevatha No Comments
About 32 players underwent the test on Friday, says SLC