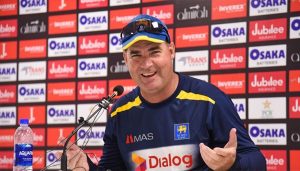 Coach Mickey Arthur is sounding like a man bereft of ideas to turn things around, limited to mumbling cryptic explanations that make little or no sense to listeners and readers

Sri Lanka (SL) losing to England 0-3 in a T20I series in England is not really a head scratcher. Eoin Morgan’s England squad is deep with skilled and experienced players. England is also a well-established squad with clear policies and guidelines, all things alien to their current opposition.

While SL’s loss to England in the T20 format is not surprising, the meek capitulation of the visitors is deeply troubling. SL was outplayed and out-thought by the hosts at every turn. The only bright spot for SL was their bowling. In all three matches, bowlers did what they could to make matches of the three but when the batting fails so comprehensively, bowling cannot overcome the humongous odds.

Kusal Perera’s oft-repeated mantra of SL committed to playing fearless cricket is sounding more a desperate plea than a convincing call to arms. Coach Mickey Arthur is sounding like a man bereft of ideas to turn things around, limited to mumbling cryptic explanations that make little or no sense to listeners and readers.

Arthur and Flower also own the failures of the team

Wonder how long it took Arthur and Flower to concoct that masterpiece. Mr. Arthur, considering the top order of all teams consist of specialist batters, isn’t it obvious that batting orders are top-heavy? Shouldn’t a team’s batting always be top-heavy since the designated job of the top order is to score more runs than the bottom order?

Obviously, the first thought is unlikely even for a man who is clinging on to his job through the skin of his teeth and the unfathomable stupidity of Sri Lanka’s top order batters who are doing their utmost to evoke sympathy for their head and batting coaches. The second implication is more likely where someone or more than one forced Arthur and the Captain’s hand about always batting first and batting aggressively regardless of pitch conditions and pitch history. If this is the case, then Arthur has two choices; he could accept the new pecking order or he could resign. To carry on when Arthur does not believe in the adequacy, or the appropriateness of team strategy that has been forced on him is dishonest, uncouth, and unprofessional.

Mickey Arthur and Grant Flower must accept the new pecking order or leave.

Not all maybe lost in England

There has been, as expected and deserved, an almost unanimous outpouring of anger and disgust aimed at the team, coaches, selectors, and management. The kind of performance shown by the team both on and off the field deserves condemnation.

Three players have already paid a heavy price for their indiscipline and indiscretions. Despite the team manager’s dunderheaded excuses* for three player’s inexcusable behaviour, Sri Lanka Cricket (SLC) management has rightfully recalled the three players back to SL.

That is the right thing to do. Let us hope that the PCR tests that are likely to be done on the squad after the threesome’s frolics turn up negative for even a single positive result will most likely result in the whole squad being placed on quarantine for 10 days. If that happens, the rest of the tour will be in serious jeopardy.

The departure of three batters from the squad and Avishka Fernando’s tour-ending injury will force selectors to pick Pathum Nissanka and Charith Asalanka. That is a positive development. If Nissanka and Asalanka perform well, then at a minimum SL has found two newcomers who could fit into the short format squads.

The selectors could/should also use this moment to give more exposure to Ramesh Mendis and Praveen Jayawickrama in the shorter format for Akila Dananjaya and Sandakan look spent and ineffective. There are also three bowling all-rounders in the squad who deserve a chance to show their skills: Chamika Karunaratne, Ishan Jayaratne, and Dhananjaya Lakshan.

Selectors have not done themselves any favours by stacking the tour squad with bowlers and bowling all-rounders. This tour does not include enough fixtures to get a peek of all of them. Considering, the best and the most prudent approach for the rest of the tour would be to expose as many new faces as possible to international competition. Yes, the new faces would be under intense pressure against one of the top ODI teams in the world, but they could use the opportunity to stake their claim to places in the team.

If that happens, SL would have salvaged something from this tour, for recalling seniors who have been discarded should never be entertained.

August 17, 2018 byRevatha No Comments
The schedule of the SLC T20 League 2018 which will be held from 21st August to 2nd September in Colombo, Dambulla and Kandy.

Chelsea with the upper hand on the second leg

May 5, 2021 byRevatha No Comments
Chelsea will host Real Madrid in the 2nd leg of the Champions League semi-final today (5)