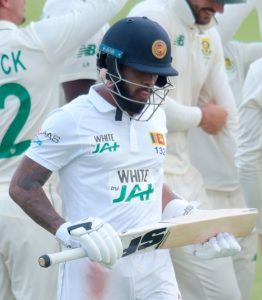 The following 22-member squad has been chosen by the National Cricket Selectors, headed by Ashantha de Mel, to take part in the two-match Test series with England, which will also be part of the International Cricket Council (ICC) World Test Championship. The first Test will start on Thursday (14) in Galle. The squad was approved by the Minister of Youth and Sports Namal Rajapaksa, Sri Lanka Cricket (SLC) said.

Addressing the media on teleconferencing, Sri Lanka Test Captain Dimuth Karunaratne said on Wednesday that out-of-form one-down batsman Kusal Mendis, who got out for three consecutive ducks in South Africa during Sri Lanka’s previous series, may be replaced by Lahiru Thirimanne, who fared reasonably well with the bat in South Africa.

Karunaratne also said Angelo Mathews, Dinesh Chandimal, and Suranga Lakmal, who missed games due to injuries against South Africa, have recovered from their injuries to be in the starting line-up for the Tests against England. If Lakmal is not fully fit, one of the three other pace options –Asitha Fernando, Vishwa Fernando, and Dushmantha Chameera– will take his place, he added.

He also said that the 22-member original squad is now pruned down to 13 and the final eleven will be picked on Thursday morning before the start of the match.

Sri Lanka missed their final training session in Galle on Wednesday due to bad weather.

Dhoni misses out on India contract

January 16, 2020 byRevatha No Comments
Kohli, Rohit Sharma, and Jasprit Bumrah have been awarded Grade A+ central contracts by the BCCI while former Captain MS Dhoni has been left out of the list

May 17, 2022 byNews Admin No Comments
World No. 2 Daniil Medvedev has admitted that he can understand why Wimbledon has banned Russian tennis players from taking part in this year’s tournament, but he still does not think it is fair.