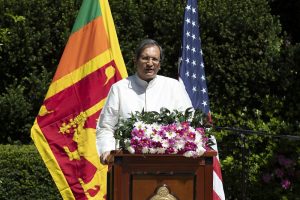 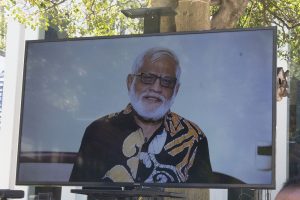 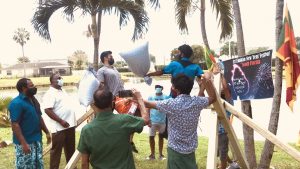 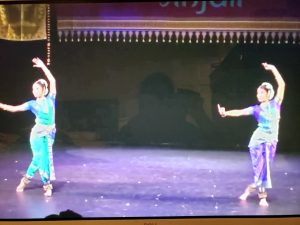 The Sri Lankan community across the USA last Sunday (18th) celebrated the Sinhala and Tamil New Year, through a programme initiated by the Embassy of Sri Lanka in Washington DC.

Particularly intended to help children living in the US appreciate the rich traditions and cultural practices of Sri Lanka, the programme was held in collaboration with the recently constituted ‘Overseas Sri Lankans Network’ (OSL) in the USA, and included music/dance items from cities in 15 States across the US.

Buddhist observances were conducted by the Chief Incumbent of the Maryland Buddhist Vihara Venerable Katugasthota Uparatana Nayaka Thero, Hindu religious observances by Swami Ragubathi Kurukkal, Islam religious observances by Mr. Seyed Rizwan Mowlana and Christian religious prayers by Reverend Father Dilantha Arachchilage. In an anushashana the Most Venerable Maharagama Dhammasiri Thero, Chief Incumbant of the Washington DC Buddhist Vihara and the Maharagama Sri Vajiragnana Dharmayathanaya emphasized the significance of the new year, and invoked blessings on the President, the Government, the people of Sri Lanka and all Sri Lankans in the US and elsewhere.

Addressing the event Sri Lanka’s Ambassador to the US Ravinatha Aryasinha said, given the COVID restrictions, the thought of having such a New Year event as a ‘Pan US virtual celebration’, germinated from the national and State based discussions the Embassy had over the past 3 months through the recently established OSL network which now spans all 50 States and supports the Embassy in advancing Sri Lanka’s interests – through political advocacy, economic empowerment, and socio-cultural engagement.

He said, “Through this coming together with Sri Lankans across the country, the Embassy was keen to not only showcase the abundance of artistic talent possessed within the community, but also to project the considerable organizational capacity the OSL community has when it works together. The Ambassador hoped that this would be a new beginning, which will encourage all to work even harder to make the voice of Sri Lankan Americans more relevant in the USA – in cities, states and at the federal level, and thereby to do the motherland proud, while strengthening Sri Lanka-US Relations.”

In a message to mark the occasion, Sri Lanka’s Permanent Representative to the United Nations Dr. Mohan Pieris emphasized the uniqueness of the Sinhala and Tamil New Year as a festival celebrated mainly by the Buddhists & Tamils, adding that Christians too participate in the New Year celebrations and it has become almost a nationwide festival. He hoped that New Year celebration would be a spring board to lasting peace with renewed hope.

Sri Lanka Consul General in Los Angeles Dr. Lalith Chandradasa, in his message elaborated on the cultural roots of the celebration by the Sinhalese and the Tamils.

“The idea of the New Year is to move on with an open mind, asking for forgiveness from whomever with we had issues during the last year, as we march forward together so that we could bring prosperity and peace to the country,” he said.

All state and private functions banned for two weeks