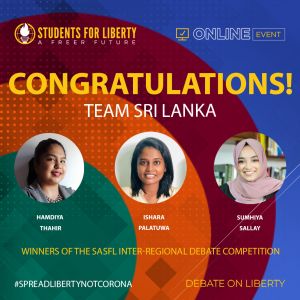 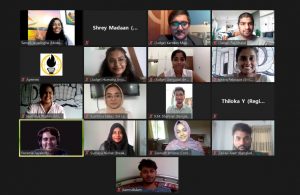 The debate competition, the very first inter-regional debate competition for South Asia, was organized by the Sri Lanka chapter of Students For Liberty (SFL), along with SASFL. The debates featured the partnership and participation of seven regions across South Asia, namely Sri Lanka, North India, South India, Bangladesh, Pakistan, Afghanistan, and Nepal, over a period of four months.

The Sri Lanka team consisted of Hamdiya Thahir, Ishara Palatuwa, and Gnei Sumhiya Sallay, and they rose up the ranks to a strong win at the finals on Saturday. With seasoned debaters coupled with members new to the debating world, the team proved how a versatile and dedicated group could overcome the greatest of challenges, proving themselves the champions of SASFL debating in 2021.

Speaking to us on the victory, Ishara Palatuwa said, “This journey has been so challenging, but we’ve learned a lot, working together, and we’re grateful for this opportunity. Having this win is amazing and it’s a dream come true to all of us. And thank you to the judges who gave us valuable feedback” while Sumhiya Sallay and Hamdiya Thahir (who was also awarded best debater of the finals) shared similar sentiments. The ecstatic joy on their faces rivalled no other, and even had the organizers smiling.

Speaking on the debate tournament, Harini Fernando of the organizing committee said, “This has proven to be a wonderful opportunity for us to liaise with like-minded young individuals in the South Asian region who are committed to upholding libertarian ideologies. We have now been able to build a strong network with SFL leaders in the region and we are affirmative that this would be an entry point for us to engage in more inter-regional activities in the future.”

The objective of this debate competition was to educate future leaders on Liberty and Libertarian concepts, and to connect people around Asia by sharing their ideas. Through the debate, SFL aimed to spark conversations on the topic of liberty while encouraging young change makers to think critically about the idea of liberty. With motions relating to liberty, and lots of interactions between different cultures, these purposes were easily accomplished.

The debate was organized with local coordinators from across South Asia joining in the efforts, and has been one of the biggest projects done by the Sri Lanka Students For Liberty chapter this year.

“This was my first international participation in a debate championship. I had an amazing experience encountering a diverse group of people. I got to know more bright minded youth, and I am looking for further programs like this in future,” Azim Amiri, a debater representing Afghanistan, stated.

The first phase of the debate tournament was a series of national level debates on the ideas of freedom, equality and liberty. Regionals were held in both regions in India and Bangladesh, with the participation of many teams clamouring to make their way to the inter-regional debate. Following the national tournament, the three winners of the regions proceeded to the semi-finals.

The remaining regions conducted their qualifier round on the 13th of March, with team Sri Lanka emerging winners and going on to compete in the semi finals against the teams from North India, South India, and Bangladesh. With Sri Lanka and Bangladesh winning, they faced each other in an intense debate about climate change to decide who would emerge the winner.

November 2, 2018 byJennifer Anandanayagam No Comments
Food cravings do not come with any warnings. Your favourite dish being merely a click away is a god-sent at times as such. This is what Meal Deal, a completely local food delivery service, promises to

The broader aspects of digital marketing are often not realised: Irosha de Silva of CreativeHub

March 2, 2021 byNews Admin No Comments
2021 has seen Sri Lanka’s understanding of technology and the online world bloom beyond imagination. We must have seen at least five years of digital progress crammed into one.