October 7, 2019 by Charindra No Comments 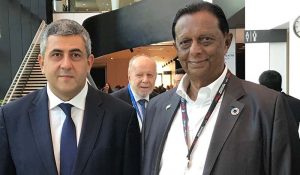 This was officially communicated to Minister of Tourism Development, Wildlife and Christian Religious Affairs, John Amaratunga by Secretary General of the UNWTO, Zurab Pololikashvili last week, the Ministry announced in a press release today (7).

Responding to the news Amaratunga stated that Sri Lanka is now an important player in the global tourism arena and these appointments will help the country to further consolidate this position.

“These important appointments show the recognition that Sri Lanka has gained as a global tourism destination in the last couple of years. It will help Sri Lanka to contribute to the world tourism agenda in a meaningful way and further consolidate its position as a top player in the international arena. It is indeed an honour for me personally and Sri Lanka Tourism which has successfully overcome all challenges that have come its way in the recent past,” said Minister Amaratunga.

The election for posts took place during the 57th meeting of the Commission in Thimpu, Bhutan in June this year and was ratified at the 23rd UNWTO General Assembly held in St. Petersburg, Russia last month. Minister Amaratunga represented Sri Lanka at this General Assembly.

“I’m confident that by holding these key positions in the subsidiary organs of the organization, Sri Lanka will greatly contribute to the achievement of UNWTO’s priorities and implementation of the programme of work for the  region and the organization as a whole,” observed Secretary General, Zurab Pololikashvili in his letter sent last week.

Minister Amaratunga previously served as Vice Chair of the UNWTO Committee on South Asia during the period 2017 to 2019 September.