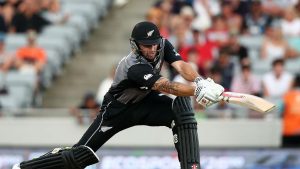 Late resurgence, with both bat and ball, helped New Zealand to an exciting win in the lone Twenty20 International against Sri Lanka.

First New Zealand lifted themselves to 179/7 after stumbling to 55/5 at the halfway mark. Then Sri Lanka looked like they were bossing the chase at 94/3 in under 10 overs before New Zealand’s bowlers made a roaring comeback for a 35-run win in Auckland on Friday, 11 January.

The chase hadn’t begun too well for Sri Lanka, with Lockie Ferguson castling Sadeera Samarawickrama for a golden duck in the very first over. Niroshan Dickwella and Kusal Perera then added 30 quick runs, but were dismissed in the space of five balls.

Debutant Scott Kuggeleijn, who had earlier made an impact with the bat, had Kusal for a 12-ball 23, cramping him with a yorker. With his very first ball, Doug Bracewell, who had top-scored with 44, sent back Dickwella, who perished for 18 in trying to heave a wide ball.

Coming into the game in sizzling form from the preceding ODIs, Thisara Perera looked good again. He raised a fine 49-run stand with Kusal Mendis to put Sri Lanka back in charge.

But when Tim Southee got Mendis caught at mid-off with a deceptive leg-cutter for 17, things turned drastically. Thisara and Dhananjaya de Silva were dismissed in the 13th over by the raw pace of Ferguson, leaving the visitors at a tricky 119/6.

Sri Lanka’s lower order was unable to muster up a fight as spinners Ish Sodhi and Mitchell Santner did the clean-up job to bowl them out for 144.

Earlier, New Zealand were in hot water at 27/4, and their comeback from there was rather remarkable. Lasith Malinga and Kasun Rajitha extracted an element of awkward bounce from the pitch, the New Zealand top-order batsmen failing to contend with what they were dishing out.

Malinga accounted for Martin Guptill in the very first over when the opener miscued a pull shot for just one. Tim Seifert fell the next over to Rajitha when he got a leading edge to cover as he looked to turn one to the on-side. 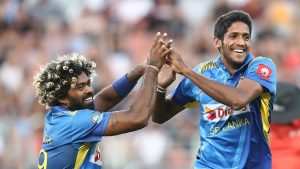 Henry Nicholls tried to play a booming drive off a Malinga in-swinger and ended up chopping on. Opener Munro showed some promise with a seven-ball 16, but his stint was cut short when he was rushed on by a short ball from Rajitha. When Mitchell Santner miscued a heave to long-off to fall for 13, New Zealand had slipped to 55/5 at the end of 10 overs.

Ross Taylor too looked uncomfortable early on in his innings, but was able to battle through for a steadying 33 off 37 balls. He started playing some aggressive shots in the end until he was caught by the keeper off Thisara Perera’s bowling as he edged a massive heave.

The real fightback came from Bracewell and Kuggeleijn. The duo added 41 rapid runs together for the seventh wicket before Southee joined in to lay the finishing touches.

In his 26-ball stay at the crease, Bracewell smashed five sixes and a four to race to 44 before falling prey to a cleverly disguised slower ball from Rajitha.

Kuggeleijn continued to make merry after Bracewell’s departure, himself muscling four sixes and a four in his 15-ball 35*. Southee’s eight-ball knock yielded him 13, including a six. The assault from the lower order meant New Zealand had given themselves a chance to win the match by adding 122 runs in the last 10 overs.

Not Just Sports: IPL and spot-fixing – Flash back to 2013

October 2, 2021 byRevatha No Comments
Not Just Sports - our weekly feature