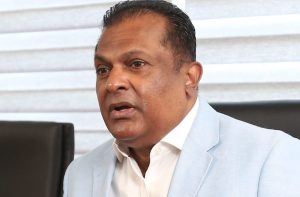 SLC President Shammi Silva: We were the first to go to Pakistan and we will go there again when time permits us to go. Photo Pradeep Dambarage / File

Sri Lanka are most likely to tour Pakistan on a quickly-arranged international cricket tour on the request by the Pakistan Cricket Board (PCB).

Sri Lanka Cricket (SLC) President Shammi Silva told the Sunday Morning Sports yesterday (25) that they are ready to send the national team to Pakistan but the only obstacle could be the tight schedule of the Sri Lanka national side towards the last three months of the year.

Yet he assured there could be a window available after SLC’s annual 20-over (T20) league, the Lanka Premier League (LPL), scheduled for 4 to 23 December.

“At the moment we don’t have much time. As soon as we return from the World Cup, we are going to play the West Indies here in Sri Lanka. Then our LPL will come up. After that, if we have a considerable time slot available, then we may be able to make it,” said Silva.

PCB, under its new Chairman Ramiz Raja, who was appointed this month in place of outgoing Ehsan Mani by PCB’s Patron-in-chief who is none other than Pakistan Prime Minister and former World Cup-winning legend Imran Khan, was put on a dilemma when New Zealand unexpectedly pulled off from their tour of Pakistan shortly before the start of the first match, a One-Day International (ODI), on 17 September.

“Earlier today, New Zealand Cricket informed us (PCB) they had been alerted to some security alert and have unilaterally decided to postpone the series… However, cricket lovers in Pakistan and around the world will be disappointed by this last-minute withdrawal,” said PCB after the controversial incident.

“Crazy day it has been! Feel so sorry for the fans and our players. Walking out of the tour by taking a unilateral approach on a security threat is very frustrating. Especially when it’s not shared! Which world is New Zealand living in? New Zealand will hear us at the International Cricket Council (ICC),” retorted Raja immediately.

Just three days after the New Zealanders’ sudden departure, England’s scheduled tour of Pakistan for two Twenty 20 Internationals (T20Is) in mid-October too was cancelled on 20 September.

Along with their men’s counterparts, England’s women too were due to play T20I ‘double-headers’ in Pakistan on 13 and 14 October, before a three-match ODI series. That series too was cancelled creating chaos and pandemonium.

In fact, British Prime Minister Boris Johnson had said the England Cricket Board’s (ECB) decision affected the diplomatic relations between the two countries as ECB and the England players’ association, the Team England Player Partnership (TEPP), are accusing each other over the fact that who initiated the cancellation.

Declaring that they had been “used and binned” by England and New Zealand, PCB had reportedly feared international cricket is entering an era of “Asia versus the west” where western countries can readily withdraw from tours of the subcontinent citing security concerns.

Australia’s men are also slated to play Test, ODI, and T20I series in Pakistan in February and March 2022, but the PCB is expecting Cricket Australia to follow in the footsteps of England and New Zealand, which Raja named as ‘the western bloc’.

Sri Lanka may tour after LPL

“The PCB spoke to us and we have already told them about our willingness to tour. We were the first to go there,” said SLC Head Silva yesterday recalling Sri Lanka’s October 2017 and September-December 2019 trips to Pakistan, which amply helped reviving international cricket in the country – following over eight years of lay off – after the brutal terrorist attack on the Sri Lanka team bus in 2009 in Lahore.

“They (PCB) wanted us to come when New Zealand pulled off. But we didn’t have enough time to make it because we had already arranged to go to Oman for our World Cup preparations,” explained Silva.

“After the LPL, I think we will be able to make it,” he assured.

The very team that survived by a stroke of luck by a terror attack later helping the same nation to salvage the game there, is perhaps one of the greatest messages of camaraderie and spirit seen in the modern world of sport.

For Sri Lanka, Pakistan has historically been a true and genuine friend.

The brave manner in which PCB and its former stalwarts such as Abdul Hafeez Kardar had fought for Sri Lanka to gain Test status in the 1970s has been well documented. It was this Kardar who had reproached the ICC Board at one stage that ‘not giving Sri Lanka the Test status is nothing but racial discrimination’.

In time of need

Pakistan offered Sri Lanka’s first Test tour abroad, only days after the islanders had played her inaugural Test in 1982.

When both Australia and the West Indies refused to tour Sri Lanka in the 1996 World Cup, it was Pakistan Skipper of the time, Wasim Akram, who joined hands with his Indian counterpart Mohammed Azharuddin to bring down a team to Colombo to show the unstinted solidarity of a true friend.

How can the Sri Lanka people ever forget that it was in ‘the Heart of Pakistan’ or ‘the Paris of the East’ – Lahore – that they had made their most memorable sporting achievement in the known history!

February 23, 2021 byRevatha No Comments
A blow on Sri Lanka's tour of West Indies