Sri Lanka needs to capitalise on the ‘wealth’ in water sports 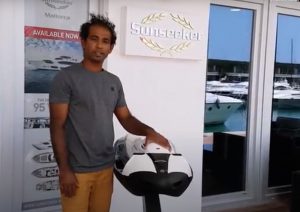 By Sunil Thenabadu in Brisbane, Australia

Ramesh Silva has been working as a senior deckhand in a hatch, owned by a billionaire UK businessman, since 2007. According to Silva, the water sports industry is a fast-growing one worldwide with many preferring to be water sports instructors whilst making it a career choice.

“This is one of the most vital segments that the Sri Lankan authorities need to focus on, in order to improve tourism, given the abundance of the natural ocean surrounding the country,” points out Silva.

Silva is also of the opinion that the authorities here also need to create awareness of the potential revenue that could be generated by emulating the kind of water sports industry which presently exists in Europe.

“Vacation is compulsory for any worker in any sphere or trade worldwide. Travel is the topmost hobby selected by the majority for leisure. Those in European countries prefer to spend holidays in the Asian countries including Sri Lanka, which has been perceived as an ideal destination,” described Silva.

“In Sri Lanka, the water sports industry is at a relatively low ebb, but it is fast-growing. However, unfortunately, Sri Lanka has a dearth of professional water sports instructors with only a handful anticipating making a career out of it since prospects remain bleak. It is high time that the authorities heading Sri Lanka’s tourist industry intervene if water sports are to be developed into a lucrative and revenue-generating industry,” he further explained.

Silva also says that the authorities should take steps to spread awareness of the potential revenue that could be generated by this sporting field. However, funding remains vital together with the conformity of accepted industry standards.

“Sri Lanka has a long way to go but if sufficient consideration is focused, the tourist industry would get a major boost to ensure the flow of inbound foreign currency. Another area that needs particular attention is the protection of the marine environment, including marine life, if water sports are to thrive in Sri Lanka,” Silva adds.

“Interest in whale watching exists and it needs to be precisely regulated. The manner the boats are manipulated may at times be harmful to species in the sea. Hence all commercial routes should not distract the habitats of fish,” Silva warned.

“The yachting industry plays a phenomenal role in the European economy. Local authorities should be willing to attract luxury yachts with environment-flexible rules and conditions that lay emphasis on cleanliness as well as zero pollution.

“Charges offered should be a standard fee for all tourists. In order to improve the industry to generate foreign currency, licensing should be made compulsory as the case with other developed countries.

“Related authorities should also put in regulations to ensure the safety of divers as well as thrill-seekers,” Silva opined, obviously providing food for thought for the authorities, particularly of the Ceylon Tourist Board.

August 17, 2018 byRevatha No Comments
Here are the four teams that will take part in the 2018 SLC T20 League that will start next Tuesday, August 21.