February 7, 2021 by Sarah Hannan No Comments

Sri Lanka saw its first female deputy inspector general (DIG) of police being nominated for appointment last year, after a seven-decade gap. Yet even that was contested by the male officers in the police force, raising questions as to why the position was afforded to Bimshani Jasin Arachchi while there were arguably more deserving male officers who could have been promoted to the vacant DIG seat.

WDIG Bimshani Jasin Arachchi’s career succession was never a cake walk, and it was not only in 2020 that her capabilities to secure a promotion in the police force were questioned by her male counterparts and higher-ups. 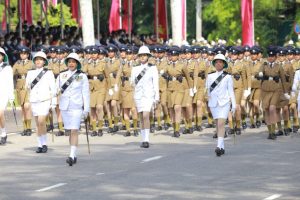 In 2007, Jasin Arachchi had applied for a promotion to Woman Assistant Superintendent of Police (WASP) as she fulfilled the qualifying criteria. The only disqualifying component she had, was her height. In 2013, her case was heard at the three-member bench at the Supreme Court, which ordered her to be promoted to the rank of WASP, with the letter of appointment required to be backdated to 2008.

This is but one example which displays the male dominance in the Sri Lanka Police, and for years, many of the female police officers have been questioning why they are barred from seeing any career progression, given that both male and female police officers are required to fulfil the same level of educational qualifications, given the same level of theoretical and practical training, and paid in the same salary scales.

The recruitment and entry of women into the police service had been influenced by several developments, such as anti-discriminatory laws in the US, Canada, UK, and Australia; the suffragette movement; later on, the feminist movement; and the adoption of international conventions on the elimination of discrimination against women.

More recently, the United Nations Security Council Resolution 1325 called for an expanded role for women in civilian police services, citing the disproportionate number of women and children impacted by armed conflict and violence.

In South-East Asia, the average is higher, with women cadres accounting for 17% in Singapore, and Timor-Leste having 17%. However, in Japan the percentage of women officers was only 7.7%. Despite good statistics, only a very small minority was at higher decision-making level and the majority remained heavily concentrated in lower levels in “sticky floor” positions.

In the Sri Lankan context, it was only in 2001, after the first batch was recruited in 1952, that the situation of women in the police service became a subject of focus.

In 2015, the Cabinet approved a 15% quota for women. While an increasing number of women were recruited to the police service after that, there was no corresponding expansion in the cadre position available to women, especially senior positions, compared with the adjustments made for the men, giving a skewed ratio and clearly discriminating against women.

According to statistics from the Performance Report of 2017 of the Sri Lanka Police, since 1952, the number of women in the Sri Lanka Police had increased to 8,640 as of 31 December 2017, representing 11.4% of the actual cadre of gazetted and non-gazetted officers.

However, while the approved cadre for women is 13.4% of the total, this does not apply across ranks. 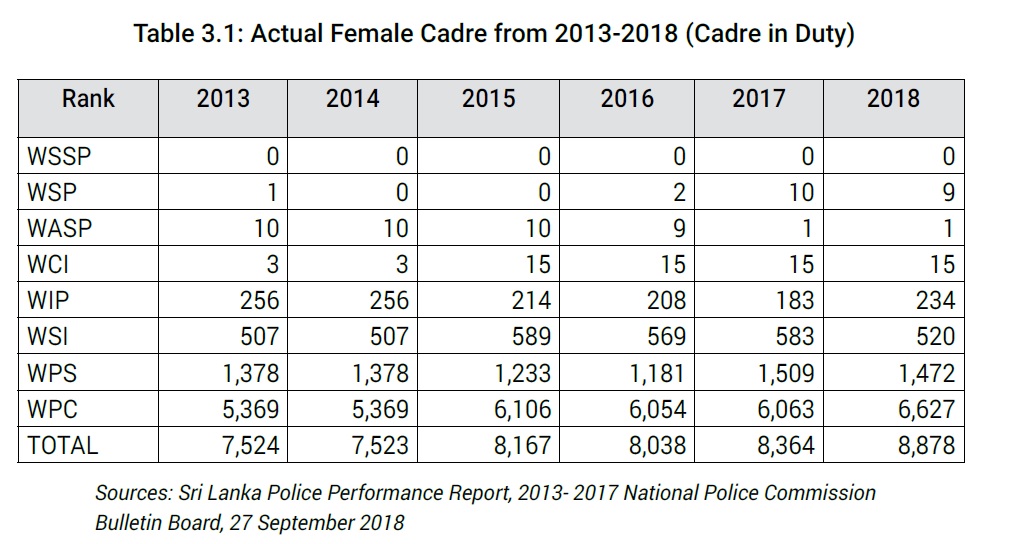 According to the NPC Bulletin displayed at the NPC headquarters (September 2018), the total approved cadre was 83, 872; however, the actual cadre numbered 75,371. There is an approved cadre of 11,263 women officers of which only 8,878 women officers currently are in the service. According to these numbers, the total number of approved women police cadre, as a percentage of the total service, is 13.4%. The actual number of women police officers amounts to only 11.7% of the total service. Neither reflects the NPC recommendation to increase strength to 15%.

In 2020, the Centre for Women’s Research (CENWOR), along with the NPC and the United Nations Development Programme (UNDP), conducted a research study on Achieving Gender Equality in the Sri Lanka Police: An Analysis of Women Officers, during which they analysed the gender responsiveness of Sri Lanka’s police service.

Disparity in recruitment and promotion criteria

When women are recruited to the police service, they undergo the same entrance tests as men, including the endurance test. The height specification when recruiting officers at the rank of constable and SI are different for women and men, but become the same when recruiting to the rank of ASP i.e., 5’ 6”. Given the average height of women in Sri Lanka, these height specifications are discriminatory and systematically block qualified women from applying for the position and being promoted.

Men and women officers have to undergo the basic mandatory training sessions when joining the Police as constables, which includes endurance, physical, and weapons training. However, women’s performance in the initial endurance examination has been cited as a reason for holding them back from being promoted beyond the rank of SSP.

The concentration of women in functional divisions is a result of structural and institutional discrimination that stereotype women as being more capable of desk-based administrative work.

Women officers are generally regarded as weak and lacking ambition because they are unwilling to take on frontline work and often prioritise their familial obligations over their professional responsibilities.

Gender stereotyping and gender-role allocations in the Police lead to further discrimination of women. Senior officers perceived women as not only liking desk jobs and taking on functional administrative roles, but also as incapable of doing frontline police work.

On the other hand, the Sri Lanka Police has made special provisions, both official and informal, for women officers based on their caregiving roles and children’s educational needs. This includes married women with children under 18 being exempted from Sunday work, less frequent transfers whereby married women with children are allowed to be in one division or district for longer than their male counterparts, and early retirement.

These special provisions are a double-edged sword, as they work to the detriment of women who seek promotion to higher ranks, since they often have to forgo the opportunity to gain the breadth of experience seen as mandatory for serving in the higher ranks. There is even ambivalence about whether women are allocated night-duty/night-time shifts.

Lack of facilities to engage in night shifts

Female officers had also revealed to the research team that women cannot do the night shift partly due to the lack of facilities in the current police stations, such as changing rooms and proper washrooms. Moreover, many of the police barracks that are often located in proximity to the station do not provide quarters to women officers, as they are deemed unsuitable for women.

Despite this, although some women may be working shorter hours, a majority of women worked long hours that went beyond the hours of their particular shift. Very often, women police officers gave their phone numbers to civilians, which meant fielding calls and following up on people’s concerns after hours.

Gazetted officers’ access to timely promotions was undermined by two inter-weaving processes. One was the unofficial formation of a “women’s cadre”, which was differentiated from the “male cadre”. When circulars announcing promotions were published, women officers were told these were relevant to the male cadre.

This separation has led to the allocation of maximum quotas for women officers at each rank. Hence, women, even if they are qualified, are not evaluated on the basis of merit alongside their male colleagues. Very often this has meant their male counterparts receive promotions before them. These “sanctioned” cadre positions have led to much anxiety and frustration amongst senior women police officers.

With only one position open in the rank of SSP, only one of the ten SPs is eligible for promotion. Promotions were one of the main issues of contention that senior women officers talked about because they felt they were being deliberately held back without legitimate reason. In addition to promotions, women were not given the role of “director” of functional divisions even though they were eligible and capable of holding such a position.

Very often, they were given the assistant director role and compelled to work under less qualified or equally qualified men. The fundamental rights case filed is a response to this overt discrimination of women in the higher ranks. The second way in which women are not promoted is because they do not meet the criteria for promotion, which has been discussed before.

We contacted Police Media Spokesperson Deputy Inspector General of Police (DIG) Ajith Rohana to inquire on their stance over these observations and recommendations that have been put forth by the female cadre of the Police. 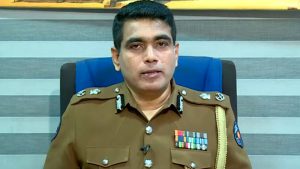 Responding to The Sunday Morning’s query, DIG Rohana stated: “The limitations on the number of ranks that are allocated as the career progresses in the police force becomes limited. This is not something that is only common to the officers in the female cadre, but also the male officers. The promotion structure can be illustrated as a triangle, which is why we hold competitive examinations, consider the level of seniority, and add the in-service merits along with the other qualifying criterions when considering promoting police personnel.”

He further explained that a standard operating procedure (SOP) is in place when promoting and recruiting officers to the Police; they have promotional criteria in place to maintain transparency; promotions are given on seniority and merit by conducting limited and competitive examinations held from time to time, after which officials are interviewed to be shortlisted; and at times, through direct recruitments.

“We adhere to these SOPs and then send a shortlist to the National Police Commission in accordance with the 19th Amendment to the Constitution. Once the new Constitution is in place, it will go back to the Public Service Commission.”

When asked whether the Police would look at increasing the percentage of female police officers being considered to be promoted to higher ranks, DIG Rohana explained that the female cadre of the Police has an allocated amount of positions in the structure of promotions. 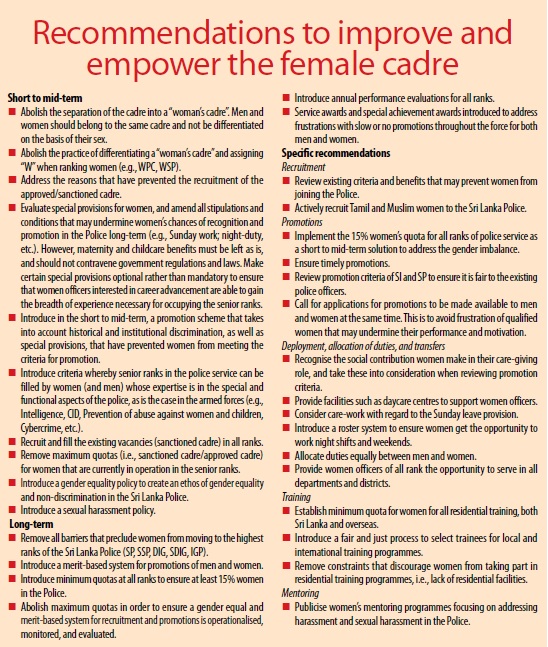