By Revatha Silva in Pallekele

Sri Lanka’s late-order batting brought them a vital first-innings lead of 46 runs in their second cricket Test against England at Pellekele, Kandy on Thursday, 15 November. 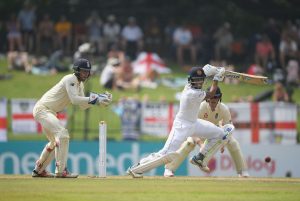 Roshen Silva struck a fighting fifty, his third in Tests

Sri Lanka made 336 in reply to England’s 290, being aided by resilient late-order batting. All their last six batsmen made it into double-figures with their No.7, Roshen Silva, leading the way with 85, his third Test fifty, becoming the last man to go.

He helped the home team accumulate 84 runs –from 252/8 to 336 all out– for the last two wickets with Akila Dananjaya and acting skipper Suranga Lakmal. The ninth-wicket stand between Silva and Dananjya was a vital 56 runs.

Given the complexion of the game and the way the Pallekele pitch is behaving assisting the spinners, the last three days of the Test will be really exciting with both teams having a fare chance of creating a result, with the home team enjoying a greater chance with their slim yet valuable first-innings lead.

The Test cricket action in Kandy on Thursday was watched by a couple of thousands of ‘Balmy Army’ spectators in this picturesque venue outnumbering the local spectators.

August 18, 2021 byRevatha No Comments
News from the European soccer scene