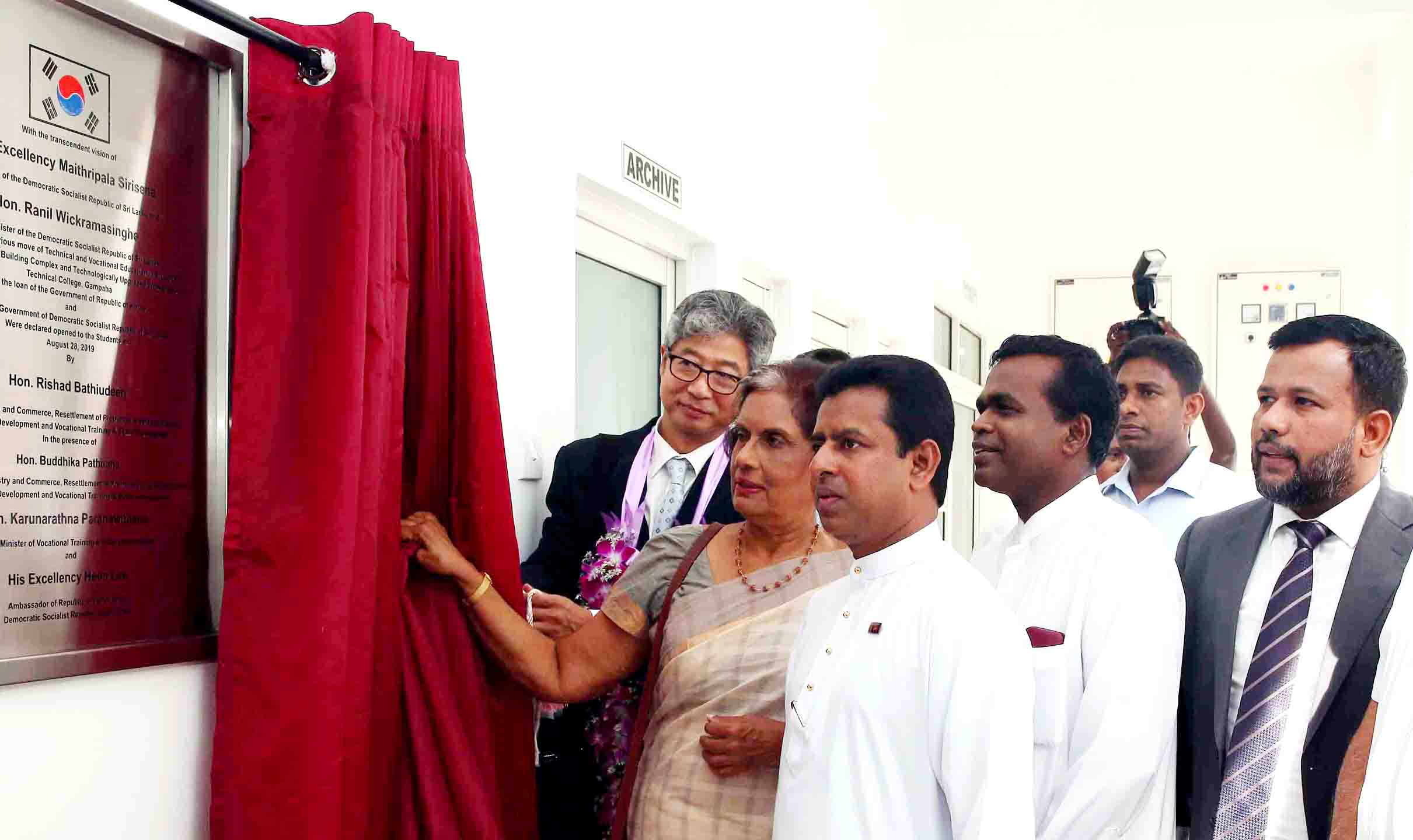 Sri Lanka plans to set up its first fully fledged Ocean University with South Korean funding of US$ 50 million in the near future, according to a communiqué issued by Ministry of Industry, Commerce, Skills Development & Vocational Training.

In addition to this nine new hi-tech training facilities across the country, modelled on the lines of the ground-breaking and ultra-modern South Korean backed KTEC Training Centre unveiled in Orugodawatte as recently as 21 August, are to be set-up.

These projects will be carried out by Sri Lanka’s state run job skilling apparatus, the Technical, Vocational Education Training (TVET) sector, for which this will be the largest project funding in its history.

Joined by his State Minister Buddhika Pathirana, former President Chandrika Bandaranike Kumaratunge, Minister of Skills Development and Vocational Training Karunatilleke Paranavithana, Minister of Transport Arjuna Ranatunga, HE South Korean Ambassador in Sri Lanka Heon Lee, and the Country Director of Colombo Representative Office of Korea Eximbank Daekyoo Park, Minister Bathiudeen was addressing the launch event of modernised Gampaha Technical College (GTC) in Gampaha. The GTC, launched exactly 20 years ago, has been modernised by a US $4.5 Mn South Korean loan funding which is part of the second phase of the two stage US $26 Mn project (the first stage was the Korea-Sri Lanka National Vocational Training Institute launched on 21 August in Orugodawatte).

Speaking about the Ocean University he said that the current ocean university is not a fully fledged one.

“We are also planning to set up a fully-fledged Ocean University at a cost of US $ 50 Mn. We will be able start work on it in the coming weeks. The Ocean University we have at present is not a fully fledged institution“ said Minister Bathiudeen and added: “A Sri Lankan industry study last year showed that 400,000 new jobs will be available in Sri Lanka in the next three years in hotel, tourism and industry sectors. According to a study by the University of Colombo 58% of unfilled vacancies in Sri Lanka are in apparel sector 20% in food industry and 33% in other manufacturing sectors. Therefore the Skills Development and vocational training institutions under my Ministry we are working to address this situation.”

HE South Korean Ambassador Heon Lee stressed of the importance of TVET in development. “In South Korea, in ‘60s and ‘70s, TVET primarily aimed to provide low level training to light industries. In ‘80s and ‘90s TVET expanded to heavy industries such as ship building and electronics. The official direction of South Korean TVET is to create the fourth industrial revolution for sustainable growth. TVET also has been a cornerstone in the development history of Sri Lanka like it did in South Korea. Hence I would like to mention that this project, supported by Economic Development Cooperation Fund (EDCF) of South Korea, is an effort to share Korea’s development experience with Sri Lanka.  Eventually this support measure will support the low income bracket by providing technical training-we shall provide then high quality vocational training, leading to poverty reduction, the primary objective of sustainable development goals.”

The modernised GTC, under Minister Bathiudeen, unveiled on 28 August, not only has hi-tech courses (such a mechatronics, CNC programming, and hydraulics), but includes several new buildings, eight tech labs equipped with Korean technology, two computer labs, a language lab, a modernised library, many ‘smart classrooms’ for the youth, and many brand new staff quarters as well, making GTC to be an ultra-modern training complex with so many modern  infrastructure, it even surpasses the outlook of some Sri Lankan Universities. Korean and Sri Lankan experts train the Gampaha youth in this facility who study upto NVQ level 6 in all courses including languages. All the enrolled youth study NVQ courses, upto the final level absolutely free of charge.

March 21, 2021 byNews Admin No Comments
Despite the pandemic-induced islandwide lockdown effectively hindering retail performance during the Sinhala and Tamil New Year last year, the industry is optimistic of achieving 80% of the retail sal