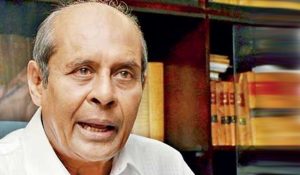 Consideration of the report of the Office of the High Commissioner for Human Rights on ‘Promoting reconciliation, accountability and human rights in Sri Lanka’ will take place at the ongoing 40th Session of the Human Rights Council on 20 March.

The draft resolution on Sri Lanka to which the President initially refused to co-sponsor, the Foreign Ministry have now stated that Sri Lanka will be co-sponsoring the resolution.

July 21, 2020 byTSM Web Desk No Comments
The Appeal Court has rejected a petition requesting the court to  issue a directive to the Acting IGP to arrest Leader of the Tamil United Freedom Front (TUFF) Vinayagamoorthy Muralitharan alias Karun

December 4, 2018 byEaswaran No Comments
A special discussion was held with all the Secretaries to Ministries under the patronage of President Maithripala Sirisena at the Presidential Secretariat, today.