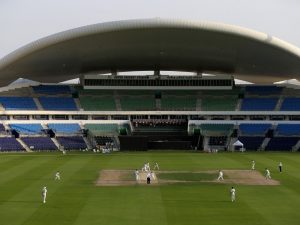 Sheikh Zayed Stadium in Abu Dhabi was established in 2004 with around 20,000 seating capacity

The Sheikh Zayed Stadium in Abu Dhabi, one of the seven emirates of the United Arab Emirates (UAE), was established in 2004 with around 20,000 seating capacity.

IPL and World Cup not clashing

The international venue would have completed hosting of their share of the second phase of the Indian Premier League (IPL) before the start of the World Cup qualifiers, now scheduled from 17 October, according to tentative schedules out for the media.

The last IPL 2021 match at the Sheikh Zayed Stadium is to be held on 8 October. The IPL tournament, though, is to go on in UAE until 15 October. The first round of the World Cup is likely to run from 17 to 22 October. The World Cup proper will take place from 23 October to 14 November.

Four teams qualifying from the World Cup first-stage will enter the Super 12s, which could start on 23 October. The final schedule of the World Cup, anyway, is expected to be released soon.

Oman to host their Group’s matches

The BCCI is likely to allot six games of the first round of the T20 World Cup to Muscat, Oman. India has the hosting rights of the global tournament and the allocation of games is at her discretion.

In a meeting in Delhi last week, it is learnt, that the BCCI had discussed the viability of holding matches in Oman. With Oman having qualified for the tournament, their team is clubbed with Bangladesh, Scotland, and Papua New Guinea in Group ‘B’ of the qualifying round.

Six league matches of that group could take place in Muscat. Only one venue, the Oman Cricket Academy Ground, is being considered for the tournament.

Meanwhile, there is a concern among the IPL teams if the South African players, featuring in the IPL, will be available for the tournament from the beginning of its second phase in UAE.

On 4 May 2021, the IPL was suspended indefinitely, after a rise in Covid-19 cases within the bio bubbles of respective teams. At the time of the suspension, 31 of the scheduled 60 matches were still left to be played. On 29 May, the BCCI announced that the remaining matches of the tournament would be played in the UAE.

The Proteas are to tour Sri Lanka for six white-ball matches, to be held from 2 to 14 September. The IPL teams are not sure if the UAE government will allow a bubble-to-bubble transfer from Sri Lanka. A similar transfer between bubbles is set to take place for those playing in the Caribbean Premier League (CPL) which ends on 15 September.

The English players in IPL

In a meeting on Saturday (31 July), the BCCI officials had also decided to work with various international boards to ensure the participation of foreign players in the remainder of the IPL.

The BCCI officials, who attended the meeting, have said that efforts were being made to ensure participation of foreign players from all countries, including those from England, although England and Wales Cricket Board (ECB) had previously declared that its players will have to make themselves available for bilateral cricket.

However, England’s scheduled tour of Bangladesh for three ODIs and three T20Is in October seems to be doubtful at this stage, Indo media stressed. An ECB spokesman had said the final decision on the tour will be taken in a week’s time.