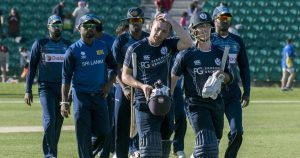 In Sri Lanka’s 2nd ODI against Scotland held at the Grange in Edinburgh ahead of the ICC World Cup, the Lankan team emerged victorious by 35 runs (D/L method).

Sri Lanka, who were put behind the stumps first, managed a score of 322-8 with Dimuth Karunaratne 77, Avishka Fernando 74, Kusal Mendis 66 and Lahiru Thirmanne 44* acquiring the much-needed runs for the team.

For the Scots, bowlers Brad Wheal 3-49 and Safyaan Sharif 2-76 were able to do the most damage to our Lions.

Once Scotland took to the stumps, their reply was interrupted by rain with the Scots scoring just 199, losing by 35 runs (D/L) with the tops scorers being George Munsey 61 and Mathew Cross 55.

The wicket takers for the Sri Lankan side were Nuwan Pradeep 4-34 and Suranga Lakmal 2-55.

The two-match ODI series against the Scottish served as final preparation for Sri Lanka ahead of the 2019 ICC Cricket World Cup.

May 24, 2022 byNews Admin No Comments
Kylian Mbappé has committed his future to the Ligue 1 champions Paris Saint-Germain Football Club (PSG), turning down a move to the Spanish giants, it was reported on Sunday (22).