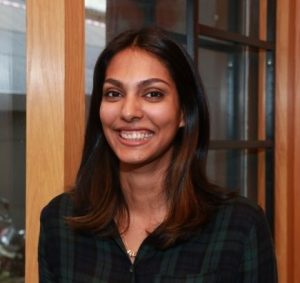 Jayatissa’s previous work was the self-published steampunk science-fiction novel The Other One which went on to win the Fairway National Literary Competition 2017. The Sunday Morning Brunch caught up with Jayatissa to learn more about My Sweet Girl.

The UK and Commonwealth (Hodder & Stoughton) release will be at the same time as its US (Berkley) release.

Tell us about My Sweet Girl.

My Sweet Girl tells the story of Paloma, a woman who swears she saw her roommate’s murder which she is convinced is tied into a terrible ordeal she had in her childhood in Sri Lanka. But as the story goes on, authorities aren’t even convinced that her roommate was real, to begin with. The book ties in suspense and the unreliable narration of a complex character who has grown up with coveted opportunities, being a Sri Lankan orphan adopted by an American couple and given the very best but who has gone and ruined it now and is trying to recover from it.

Paloma is one of those characters who’s very complex, sometimes toeing the line between meanness. I like to keep everyone grey in my writing. I’ve always been a big fan of morally ambiguous characters. Everyone believes they’re the hero in their own story.

There are several aspects of My Sweet Girl that are, for me, a little personal. Some situations are what I’ve faced as a brown person living in the US and navigating through typically white American spaces and dealing with things like exoticism.

Your first book was science fiction and My Sweet Girl is a thriller. What was it like switching genres?

It was a lot of fun for me to mix genres, I was in a slump after my first book The Other One. I had a second book outlined but it just wasn’t working out very well for me. I was hitting that terrible writer’s block that everyone dreads. I thought I’d work on something else for fun and this character Paloma just took hold.

I am, by nature, an avid reader of thrillers and suspense, especially psych suspense, so for me it didn’t feel like too much of a crazy switch. It felt very natural. In fact, I enjoyed it so much I think I’ll be staying in this genre, at least for a while.

How did the book deal with Hodder & Stoughton come about?

I’ve entered into a two-book deal with Hodder & Stoughton which is for two standalone books in this suspense thriller category, starting with My Sweet Girl which will launch in the UK and the Commonwealth with Hodder & Stoughton at the same time as it will release in the US with Berkley (which is an imprint of Penguin Random House).

With My Sweet Girl, I went down the traditional publishing route in every sense of the word. I spent a lot of time and energy trying to find an agent. There have been a few writers who’ve been very successful without agents, but it’s understood in publishing that you need an agent on your side selling your book for you. My agent has done an amazing job of selling My Sweet Girl.

I did a few queries, but I had my best success on this Twitter pitch event, where agents invited authors to pitch to them. I met my agent that way, and even after we signed, I was working on some revisions of the book to strengthen the story before she shopped the book around to various publishers. I’ve found the collaborative process between authors, agents, and editors as very impactful. I was very lucky in that I got an offer very quickly. Everything was done and agreed within a week.

What advice would you give other aspiring authors looking to get published, especially the traditional way?

I think the first thing is to look at making connections with the outside world. We have those opportunities to connect now, opportunities we didn’t have even 10 years ago, like hopping on Twitter and connecting with other writers. Connecting with other writers, editors, agents, and people in the field made a huge difference and got me thinking beyond the options that I thought were available to me at the time.

Another piece of advice I would give young writers is not to hesitate to put themselves out there. Also, the more you write the better you get.

My Sweet Girl is scheduled to release in September 2021. I’m hard at work on my second thriller. It’s a process which will take a year – from submission to getting it on the shelf.

A rediscovery of cultural roots at the Guru Gedara Festival

August 16, 2018 byJennifer Anandanayagam No Comments
To celebrate 75 years of dance and culture, the Chitrasena Vajira Dance Foundation, along with Cinnamon Life, in association with John Keells Foundation, is set to present 'The Guru Gedara Festival

The importance of queer spaces

January 6, 2019 bythemorninglk No Comments
The last Sunday of 2018 saw the coming together of queer icons Bhoomi Harendran, Gaapink, and Alok Vaid-Menon at Music Matters, hosted by Elsz.