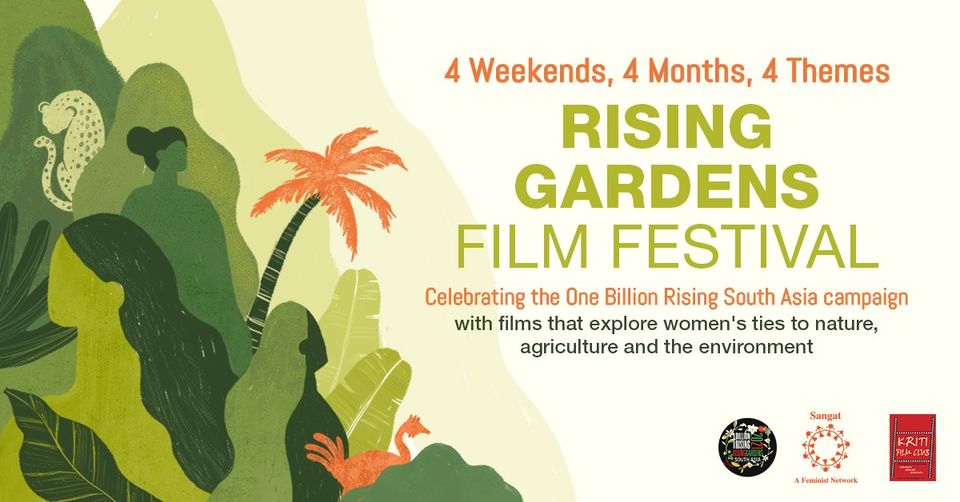 January 14, 2021 by Venessa Anthony No Comments

As an art form, film is particularly effective at presenting a snapshot of a particular setting, whether real or fictional. In looking at films that effectively project such settings, the Rising Gardens Film Festival was organised to encourage introspection and debate about themes revolving around various cultures and historical aspects of many countries. The festival presented by by One Billion Rising South Asia, Sangat and Kriti Film Club and curated by Reena Mohan also hopes to provide an opportunity to see the works of independent filmmakers in a climate of increasingly corporatised media.

In hosting this festival online, they have simplified the concept of having conversations across geographical boundaries. Their main objective is to share stories that resonate, have nuance, and capture the essence of our multiple and shared realities.

The festival showcases 48 films from 11 countries, ranging from a wide variety of international favourites to community videos, from classics to debut and student films. In addition to the two films from Sri Lanka directed by Irushi Tennekoon, the festival will also showcase films from Australia, Bosnia, Canada, France, India, Nepal, the Netherlands, Pakistan, Philippines, and the US.

Tennekoon will be presenting her films under the subcategory Cosmic Connections, representing women and nature. Both her films are animated and centre around two strong women, who after being touched by nature, have had a significant impact in the country.

One of her films features an animated version of Sri Lankan marine biologist and ocean educator De. Asha de Vos, who talks about the blue whale skeleton at the Colombo National Museum that inspired her as a child. The four-minute film also describes de Vos’s struggles as a South Asian woman, employed in the field of science, where she says she was constantly dismissed at meetings for being too young and too female and was spoken to in a very patronising tone, all of which she had to overcome over the years.

Her next film spins a story on the life of children’s book writer and illustrator, now late Sybil Wettasinghe. Wettasinghe was inspired by the small fact that as a little girl, she would go with her grandmother to the forest early morning to bathe in the river while birds flew ahead and animals scurried about. In just a mere seven minutes, Tennekoon portrays how such a simple act sparked Wettasinghe’s passion for creating many of her children’s stories with its distinct drawings and enchanting storytelling that we all know and love.

FIELDS OF SORROW, FIELDS OF HOPE / women and agriculture

COMMUNITY AND SUSTENANCE / women and food

March 21, 2019 bythemorninglk No Comments
While the idea of letting your body build up natural immunity and protect itself from diseases in a natural way may sound appealing, it is also extremely dangerous to society surrounding them.

October 30, 2020 byJennifer Anandanayagam No Comments
Canada has selected Deepa Mehta’s Funny Boy, an adaptation of Shyam Selvadurai’s coming-of-age novel of the same name, to represent the country in the 2021 Oscar race in the international feature cate