October 31, 2021 by Jennifer Anandanayagam No Comments

What kind of will does it take to come from less than fortunate beginnings, suffer an experience that causes one to lose his sight, and pull yourself from depression and wanting to end your own life? Sri Lanka’s first blind triathlete Khalid Oshman would most likely have an answer, but I doubt it would be a simple or flowery one. “Nothing comes easy unless you try,” said Oshman, sitting in his room on a Zoom call with me. “We must challenge our limits, making the impossible possible.” 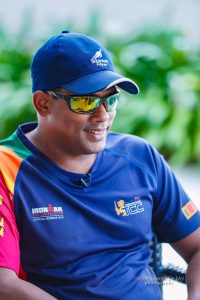 Oshman’s story would touch even the hardest of hearts, but he doesn’t want the world to sympathise with him. He wants, instead, for people to have empathy. “What we need is support and for people to see the ability in the disability.”

Oshman was born in Kuwait, but he never knew his birth parents. In Sri Lanka, he was raised in an orphanage and was later adopted into a Sri Lankan family. The service-oriented young boy was naturally drawn to a career with the Sri Lanka Red Cross Society where he initially worked as a first aid co-ordinator. Aged 26, Oshman lost his eyesight because of medical malpractice. Facing possibly the hardest time in his life as a 100% visually impaired young man, he sank into a deep depression.

“I was in my room for about five to six months,” said Oshman, talking about this dark time in which he contemplated ending his life. His cousin Siddeek played a pivotal role in getting him out of his room. “‘You’re not going to stay like this’, he told me. ‘You can create change in other people’s lives’.” Siddeek’s words of encouragement cut through the pain and Oshman eventually decided to pick himself up and try. He recalled that his sister too helped him navigate this time in his life.

It goes without saying that Oshman knows the value of having people to turn to and to talk to in difficult times. “If you listen to a person, I think, this can contribute to their mental health,” he shared.

The CCC line – the free telephone counselling service in Sri Lanka – run by the Courage Compassion Commitment (CCC) Foundation also played an instrumental role in his life. While he himself dialed their number 1333 and found hope and strength in their assistance, he also went on to learn from them on how to support people in need of similar assistance. He pledged his support to the foundation and its cause further by taking part in their 1333 Bikeathon in 2017.

An uphill climb, but it was worth it 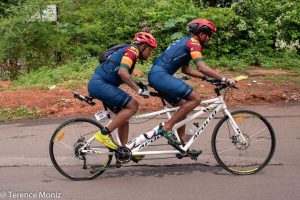 Currently a motivational speaker and a sportsman who’s shined in swimming, cycling, and marathons, Oshman’s accomplishments are awe-inspiring, to say the least. Fuelled by his desire to change other people’s lives through his own, in 2011, after he lost his eyesight, he joined the Sri Lanka Council for the Blind and completed a year’s worth of mobility training in one week. From learning to cook by himself, travel on his own, and more, Oshman tackled the tasks he needed to become fully independent.

“It wasn’t easy. I had to start a new life from scratch,” he remembered. From completing his first task after the training, which involved him travelling by himself using public transport from his home in Kolonnawa to the Sri Lanka Council for the Blind office in Rajagiriya, to now being the world’s first blind athlete to complete three triathlons and three full marathons, it seems Oshman has indeed done the unthinkable.

Recalling that first bus ride, Oshman smilingly said: “Once I reached my destination, after many challenges, I knocked my head on a street pole,” adding that he has fallen from buses several times as well. His optimistic nature which didn’t want to dwell for too long on the negatives shone through even in the virtual interview, as he turned the narration of these stories into symbols of victory and strength. It was hard to miss his indomitable spirit. Landing his first job as a visually impaired individual was the next challenge. “I tried getting a job at more than 30-40 companies,” he shared. In 2013, he found a job as a customer service representative at the Biyagama Free Trade Zone and he served in that role till 2017. Today, Oshman works as a customer service officer at SriLankan Aviation College in Katunayake. 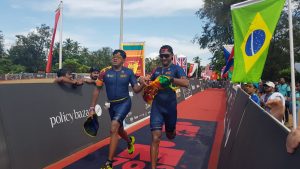 While tackling the challenges of everyday life, Oshman also wanted to give back. “I had a duty to support society,” he said. This is when his involvement in various charity projects started. He has been a part of Run for their Lives from 2013 to 2018, taking part in the 5 km run in aid of the Maharagama Cancer Hospital. In 2015, he took part in “Walk for Sight”, an initiative in aid of the MobileEyes unit construction, where he walked from the East to the west coast of Sri Lanka over a 17-day period, covering 330 km. He has cycled 20 km around Colombo to raise awareness for the same cause in 2016, and has walked from the North to the South of Sri Lanka in 28 days, covering 663 km, to raise funds to build the Karapitiya Matara Cancer Hospital under the initiative “Trail as One”. 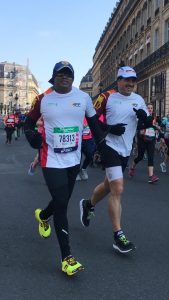 In addition to these, he’s also been a part of projects that have supported children in education, pregnant women, the environment, etc. His motivational presentations have inspired schools such as Ecole Française Internationale de Colombo (EFIC), Overseas School of Colombo, and Elizabeth Moir; companies such as Hayleys, Eyepax, Suez, OTV-Veolia, and Unilever; and clubs such as the Triathlon Club Colombo and Leo Club of Nawala Metro.

Swimming was what his heart was drawn towards first, and to his support came former Olympian Julian Bolling with a “yes” attitude that propelled Oshman to great heights. He went on to compete in the National Championships of 2013 and won the bronze medal in a 50 m freestyle event and has secured numerous medals in Indo-Sri Lanka Masters Swimming Meets. He even qualified to represent Sri Lanka at the T20 Visually Impaired World Cup held in India in 2017.

Khalid is an inspiration: Denis Crassier 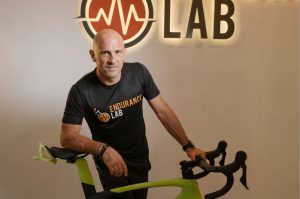 When professional athlete and IRONMAN-certified Coach Denis Crassier heard in 2018 that Oshman was interested in training for and participating in the world-recognised long-distance triathlon races, he admitted, he was “a little surprised”. Crassier, a former rugby player in the French Federal level, went through his own struggles after he suffered a heart attack on the field. He rebuilt his life – mind and body – by running. He ran his first IRONMAN 70.3 at 43 years of age. When he moved to Colombo to take up the position of Chief Finance Officer and Deputy Managing Director at OTV-VEOLIA on the Greater Matale Water Supply Project, Crassier also joined the Triathlon Club Colombo (TCC) as triathlete and administrator. Having been instrumental in establishing a triathlon community in the country, he is one of the founding members of TCC and of EnduranceLab, Sri Lanka’s first endurance multi-sport centre.

The definition of a fighting spirit, Crassier successfully coached two visually impaired athletes (including Khalid Oshman) and their guides (both also persons with disabilities), an athlete from the indigenous Vedda community for the IRONMAN 70.3 Colombo event, and many more young triathletes, including Puvini Kahandawala, the first Sri Lankan woman to have qualified for the IRONMAN 70.3 World Championship and first civilian athlete to be National Champion and SAG medallist for Sprint Triathlon. 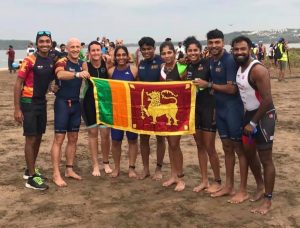 The initial surprise Crassier felt turned into a keen admiration for Oshman’s motivation and determination. “I’m used to working with high-level athletes, and this is the first time that I’d seen such determination and motivation,” shared Crassier, who took up the challenge of training Oshman for IRONMAN 70.3 Colombo. Crassier and Oshman’s relationship has developed, over the years, to one of mutual admiration for each other, and this was evident in the gentle teasing and fond camaraderie they displayed while on a second virtual meeting with Brunch.

“In competitions like these (IRONMAN), your enemy is yourself,” shared Crassier. “You have to be ready to fight against yourself in such events. During this long journey, you will have some times of low morale and you will have to face injuries to your body; if you don’t have the fighting spirit, you will not be able to face all of it.” A big believer in the power of meditation and visualisation for his sporting career and personal life, Crassier said he advised Oshman to adopt this practice he strongly believes in. “In the last 100 metres of IRONMAN, you have to sprint on a red carpet to the finish line. I’ve asked Khalid to lay on his bed each evening, slow down his breathing, and to visualise himself on this red carpet.” Visualising where you want to be, according to Crassier, helps in building the fighting spirit within yourself. 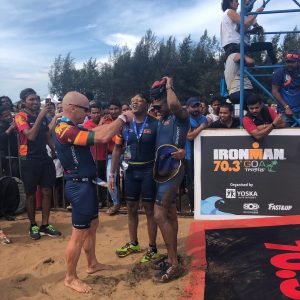 He is also a believer in counting our failures as strengths. “Don’t be afraid to fail,” advised Crassier, who thinks the main reason we avoid trying something new or reaching for a goal is because we are afraid we’ll fail. He went on to explain how Oshman’s own life and the story of how he’s overcome failure after failure to get to where he is today is something that inspires him daily. “After each race, or any events we did together, the day after, he’d ask me, ‘Denis, what’s next?’”

Crassier ardently believes that if we aren’t afraid to fail, we will eventually succeed at whatever we set our minds to and this success will propel us to take on even larger goals for ourselves. Cutting in while Crassier shared how his mentee has touched his life, Oshman recounted an instance when he was scared at the prospect of doing a sea swim for IRONMAN. “Denis told me to think of the sea as one big pool,” he laughed, adding how his coach’s belief in him has helped him accomplish the sporting achievements under his belt – all of which required far more than just physical strength alone.

The future for Oshman, hopefully, is going to be full of more endurance-based events which he wants to tackle with his can-do attitude. More specifically, he plans to continue working on a dream he’s been focusing on for a few years, delayed mainly due to the pandemic – the IRONMAN 2023 World Championship. He also hopes to compete in the Asian Para Games.

The Film Junkyard: The Art of Foley

April 30, 2021 byNews Admin No Comments
Although films fall under the visual platform, even the most breathtaking films might fall short without proper sound effects. From the sound of footsteps to the swishing of garments as a character mo