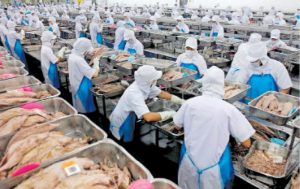 Sri Lanka’s island status has made it a rich hub for seafood of different varieties and an extensive network of seafood exporters. Thus, the seafood product sector has emerged as a quality exporter of a wide variety of fish, with the most popular of them being tuna.

According to the Sri Lanka Export Development Board (EDB) website, the country is currently home to 24 seafood exporters, whose top five exports consist of tuna (in fresh, chilled, and frozen forms), shrimps and prawns, crabs and lobsters, shark fins, and fish maws. These exporters have penetrated several international markets including the likes of the US, Italy, France, the Netherlands and Hong Kong.

Due to this, the country’s seafood exports have been able to garner substantial revenue over the years, with EDB reports showing that the export performance of the sector was $ 265 million in 2018 and $ 262 million in 2019.

EDB Chairman Prabhash Subasinghe reported that Sri Lanka’s seafood exports are seeing strong demand and higher prices even during the global pandemic in April 2020 during an online forum organised by Advocata Institute, a Colombo-based think tank.

During this forum, he explained that the country was exporting to top markets like Italy, even though those markets were under lockdown. He attributed this to the Government declaring seafood as an essential service soon after the initial nationwide curfew was imposed.

Despite this, Sri Lankan seafood exporters seem to be dropping the ball when it comes to other markets like Australia, according to Seafood Importers’ Association of Australasia (SIAA) Executive Officer Mark Boulter. During a webinar on “Market Enhancement for Sri Lankan Products and Services in Australia”, held on 7 October, he stated that Sri Lanka has a huge potential to tap the Australian seafood importers market.

Australia is a big market for Sri Lankan seafood exporters, even being among the top 10 in 2011, according to the EDB website. However, Sri Lanka is not among Australia’s top 10 importers. In his presentation, Boulter showed that in 2019, Australia imported 214,000 tonnes of seafood, with 150,000 tonnes of it being from Thailand, China, Vietnam, and New Zealand, the country’s top four importer markets, respectively.

Compared to this, his presentation revealed that according to Australian trade data, Sri Lanka only accounted for 81 tonnes.

With a population of 25 million people where around 15 kg of seafood is consumed per person each year, Australia generates about $ 5 billion in revenue from end-of-point sales of imported seafood. The main imported categories of seafood include canned and frozen, out of which the top three are 82,686 tonnes of canned fish like tuna, 52,822 tonnes of whitefish, and 31,734 tonnes of prawns.

Boulter pointed out that since tuna is Sri Lanka’s top seafood export, and one of Australia’s top seafood imports, there is a massive opportunity for local exporters to tap into the Australian market, particularly in the frozen seafood category.

“If I had to pick some species which I think would provide Sri Lankan exporters a great opportunity, I would say any whitefish species like barramundi, and blue swimmer crabs.”

He explained that there were several hurdles local exporters should familiarise themselves with before commencing business with Australia. These included government regulatory requirements such as biosecurity which set the grounds for what can and cannot be brought to Australia and under what format they should be brought in, food safety assessments to inspect the products against food standard codes, weights and measures, and labelling/naming of the products.

Boulter stated that other requirements include market requirements with regards to specifications and sustainability/social welfare.

During the webinar, Consulate General of Sri Lanka in Sydney, Australia Consul (Commercial) M.M. Abdul Raheem agreed with Boulter’s statement on the potential of Sri Lankan seafood exports. He gave a comprehensive overview on how easy trading with Australia really is.

In his presentation, Raheem showed that Australia is an open market with minimal restrictions on imports of goods and services. This is due to their trade policy being based on trade openness, economic growth, and improved living standards, with emphasis on improving international competitiveness and market access overseas.

The country also places a high level of dependence on imports of a number of products, which include seafood.

Moreover, Raheem stated that customs tariff rates in Australia vary from 0 to 5%, with an average duty rate of 4.6%. However, some goods such as food items and electronic products do not attract customs duty.

“These reasons add to the huge potential of the local seafood exporters to tap into the vast Australian market which is currently being dominated by other countries in the region like Thailand and Vietnam,” Raheem noted.

Apartment VAT exemption to benefit nobody?

November 3, 2019 bythemorninglk No Comments
The Government’s recent decision to exempt apartment units that are under Rs. 25 million from value-added tax (VAT) would not benefit Sri Lanka’s property sector in any meaningful way.

It behoves me to write this!

May 23, 2021 byNews Admin No Comments
What in the world does “behove” mean? That was my question as well when I heard it for the first time at Virtusa, possibly in 2002. As a definition, it refers to “a duty or responsibility for someone