On 20 May this year, we saw the emergence of one of the most horrifying incidents to have been caught on CCTV camera in the last few months: A man was seen lying motionless on the road after which a bus runs him over.

That man was Susil Indrajith.

The gruesome tragedy of this situation is further exacerbated by the fact that he was a family man looking to find food for his wife and daughter during a lockdown, where essentials are fast running out for the common man not accorded with privilege.

In the subsequent additional clips released from the CCTV footage of this incident, Susil Indirajith is seen conversing with two policemen, after which another man is seen to assault him, rendering him unconscious. In a situation where the Police, who are instructed to “serve and protect”, should ideally have aided this man, not just in his quest for food, but also after he was assaulted by another, they simply drove off, leaving the unfortunate man to face his untimely fate. The man who carried out the assault was not arrested, but instead casually ignored, as if this was a normal conversation and no violence had transpired.

This clip has done something to awaken a rage unlike any other within those who actually watched it; the question now remains as to how many people that actually is. When George Floyd was murdered last year on 25 May, the world erupted with cries for justice and outrage unlike any seen before it. Countless voices in Sri Lanka raised the alarm for justice to be dispensed for a man and a movement which had little to do with them; everyone was united for the sole cause that this was what it meant to be human. They were right.

We now see a near-identical situation arising, and yet, it appears as though Indrajith is not deemed worthy of a hashtag or even acknowledgment by those who still have #BLM in their social media bios. Why is it, then, that we choose not to take as much notice of our own backyard than we do for something happening within a different continent altogether? 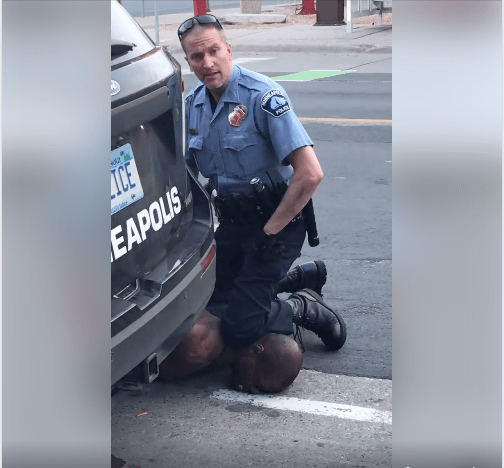 In 2020 Derek Chauvin a white police officer in US knelt on George Floyds neck for nine minutes and 29 seconds after he was handcuffed and lying face down leading to Floyds death.

Police brutality could very well be deemed the next epidemic.

On 3 April this year, the Bar Association of Sri Lanka (BASL) stated that it would observe action being taken to curb what it calls “a disturbing trend of police brutality in the country” and stands ready to intervene where necessary. “The BASL is firmly of the view that the use of force should not be used under any circumstances except as provided for by law. In exceptional and extenuating circumstances, the use of force should be minimal and should be proportionate to the circumstances.” This position is firmly supported by legislation, the decisions of the Supreme Court, and the regulations of the Police. Despite criminal and other proceedings initiated against police officers concerned in several cases of police brutality, the BASL said there is an urgent need to address the culture of impunity and permissibility and the systemic issues that enable such police officers to act in an unlawful manner in complete disregard of not only the law, but also the rights of persons whom they are bound to safeguard and protect.

Welcoming a bill presented by Justice Minister Ali Sabry to amend the Code of Criminal Procedure Act No. 15 of 1979 to impose mandatory monthly police station inspections by magistrates, the BASL said, however, that monthly visits by judicial officers alone will not be enough to address police brutality. “There must be a concerted effort by all authorities concerned, including the National Police Commission (NPC) and the Human Rights Commission of Sri Lanka (HRCSL) to address the issue.”

Having made this statement just a month before a potential case of manslaughter caught on CCTV simply reaffirms the stance that Sri Lanka does indeed have a problem.

Upon the heels of this gravely upsetting incident came the news of the next horrifying tragedy: The death of a youth in police custody. Arrested on drug-related offences, this young man died last week in police detention. His family says the young man was tortured to death at the Batticaloa Police Station in eastern Sri Lanka. This is the 11th recorded death in police custody in just over a year’s time.

Twenty-one-year-old Chandran Vithusan, who was picked up from his home in Iruthayapuram in Batticaloa around 10.30 p.m. on Wednesday (4) night, was reported dead in the early morning the next day. According to his mother, Vithusan received a telephone call when he was at home and went out to answer it, despite being asked not to step out. The telephone call was said to be from his friend.

“The Police then picked him (up) in front of the house and hit him with poles on his head and dragged him away from the street. They came back today early morning and said he is dead. They said they are from the Criminal investigation department (CID),” his sister told local journalists. Family members say he was taken to the Batticaloa Police Station and kept in lockup and was reported dead in the morning.

His maternal uncle, who was an eyewitness to his arrest, said: “I went and tried to stop him from being arrested. But I was pushed away and said that a case would be foisted against me also. His hands were pulled behind and handcuffed to a tree and attacked. Then he was dragged to the corner of the street and taken away to the police station. Again, by midnight, they came back and searched the house and went empty-handed. We were told not to come to the police station now and come in the morning. They asked for a dress but left before it was brought.”

The district magistrate Karuppiah Selvarani has ordered for an autopsy to be done and the Eravur Police Station to inquire into the incident and report back to the court. The young man had fallen ill while in custody and the postmortem report says he died from a drug overdose, Colombo-based media reported quoting unnamed police sources, hours after JDS revealed the circumstances surrounding the death. Family members of the youth call this a blatant lie and cover-up.

A month ago, the HRCSL had requested the Police Chief to provide a report on inquiries conducted into deaths in police custody. Although the deadline was 30 May, JDS has no confirmation that police had fulfilled the request.

Will we then limit our pleas of justice to sharing CCTV footage or an old passport photograph of the victims of police brutality, and then forget after a few mere minutes? Or will we give our fellow countrymen the respect and dignity they deserve at least in death to make more noise to decipher the truth?

That is up to us. Accountability is seldom established in a society which deems its own less worthy than those who become an international trend. We must do better to deserve better.

(The writer is a lawyer, teacher, and political commentator of Pakistani origin based in Colombo, Sri Lanka. She can be found on Twitter at @writergirl_11)

Deleted NMRA data to be restored?

September 5, 2021 byAazam Ameen No Comments
The State Minister of Drug Regulation and Supply and the Chairman of the National Medicines Regulatory Authority’s (NMRA) stated that the originals related to the deleted cloud data are safe.