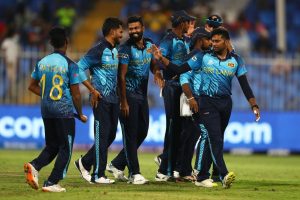 Beware of the Sri Lankans! We never go down forever! Photo SLC

Despite early exit, Sri Lanka under showed some encouraging promise in the World Cup

Not so long ago, the Sri Lankan cricket team had returned from a tour of England battered and bruised. Remember? Some players were caught smoking in England streets as the fans here were crying repenting on ‘our’ predicament.

Five T20 defeats on the trot followed by two One-Day International (ODI) losses with only rain in the final match avoiding an outright whitewash! This was a sure sign that our cricket has hit the rock bottom.

Going by that bitter past, just months away from now in June-July this year, the way the Sri Lanka white-ball outfit, under a new Skipper in Dasun Shanaka, performed in the T20 World Cup was creditable, encouraging, and showing signs of better things to come in future.

They had won at least eight games at a trot –including the Oman T20s and the World Cup warm-up matches– and though they lost their last three –against Australia, South Africa, and England in the World Cup Super 12 — Sri Lanka have shown a remarkable improvement.

They have risen from a bitterly desperate position to a hopeful and promising one within the last three months or so.

Remember not so long ago, there were no batters in the team to hit hard and clear the ropes in the shortest format; there were not batters to bat out an innings; there were no bowlers who could take the ten wickets of their opposition. There were genuine fears that Sri Lanka may lose against even Oman, Namibia, Ireland, or Papua New Guinea

Now such a hopeless and disappointing situation seemed to be all but over. Now, Sri Lanka has a clear journey ahead of them where they can reach the top of the world again if they try really hard and systematically by the time two more World Cups will be approaching in years 2022 and 2023.

Their situation in July was probably was the worst thing that happened to our cricket since we were at the apex when we won the 1996 World Cup. All credit should go to Arjuna Ranatunga and his team of super stars who took the world by storm then.

Nothing had gone right for Sri Lanka during the past eight years where they have had five coaches. As far as the team’s discipline was concerned, there was a lot to be desired.

It had been reported that the players’ morale has plummeted since the introduction of performance-based contracts. There were numerous other obstacles then before the team’s march forward.

All have fluctuating fortunes

Amidst all this chaos, there was a glimmer of hope for Sri Lankan cricket, where our young bucks, ably led by Shanaka, are showing promise.

After the England debacle, they actually turned the tables on an Indian ODI outfit by beating them 2-1 before they toppled a strong South African side at home. That was how things began turning the other way round for young Sri Lankans.

Every nation has its ups and downs. Nobody can be on top for long. True, the West Indies and Australia ruled the world of cricket for almost a decade but those are very rare occurrences in world cricket.

Despite all their facilities, luxuries, and a star-studded national side, see how India is struggling at the moment to stay on in the World Cup!

Never stop standing behind the Sri Lanka cricket team. It is the only “our team”.

Month before, they were not much considered threats to other international sides. Now they are regarded great, prospective international talents. There are many more youngsters behind them, knocking at the door.

And still there are experienced veterans too, such as Kusal Perera, Angelo Mathews, Dimuth Karunaratne, Suranga Lakmal et al who can guide the youngster in the right path.

Beware of the Sri Lankans! We never go down forever!

Tharanga to join Dilshan in Australia

May 8, 2021 byRevatha No Comments
Tharanga to play division-3 cricket in Australia.