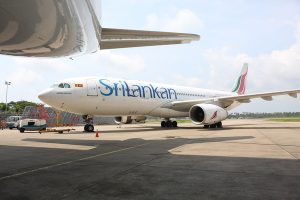 The controversial Air Portugal aircraft that SriLankan Airlines had leased at a massive loss due to service limitations would finally be refitted to be able to operate on long hauls, The Sunday Morning learnt.

Ranatunga told The Sunday Morning that this aircraft had been leased by the former Government without the approval of the Engineering Department of the Civil Aviation Authority (CAA).

“This plane has been grounded for over a year, incurring heavy losses, but no one exposed it during the time of the UNP-led Government,” the Minister said.

He explained that the aircraft had been part of the conditions within the severance deal SriLankan Airlines had regarding the procurement of a batch of new A350-900 aircraft.

“The former Government agreed to unacceptable conditions when they cancelled the A350-900 deal and a condition of the deal was for us to pay a lump sum as well as to take over this aircraft. But it was taken over without the approval of the Engineering Department,” he said.

SriLankan Airlines Union Chief Janaka Pathirathna said that experts had found a host of problems during the preliminary inspections.

“Our experts found many problems with the aircraft, such as corrosion. They detected some 1,100-odd issues with the plane,” he said.

He noted that the main problem was to do with the in-flight cabin.

“The in-flight cabin of this aircraft was not suitable for the flights SriLankan Airlines operates, such as long-haul flights. Therefore, the plane was grounded,” he said.

According to him, engineers and experts had warned the SriLankan Airlines management at the time that it was not worth the leasing investment, but the management had gone ahead regardless.

“We told the SriLankan management, but due to the pressure from cancelling the A350-900 deal, they agreed to take the plane,” Pathirathna said, adding that the lessor practically forced the plane on SriLankan Airlines.

“They (Air Portugal) themselves brought the plane and parked it with us. It was not a SriLankan pilot who brought it down,” he said.

Pathirathna noted that leasing the plane at Rs. 585,000 per month caused a massive loss to the State.

“The plane was grounded for over 18 months. That roughly equals Rs. 10 million in monthly lease payments that SriLankan had to bear for a plane that wasn’t even used,” Pathirathna said.

He said that in the last two months, since November 2019, the aircraft was used for short flights.

“The plane was used for pilgrimages to Jeddah. It only functioned for about 60 hours per month, while planes in the usual fleet would do about 600 hours each month,” he said.

“There was dispute over our procurement of the A350-900 deal, so we had all the aircraft recalled and got compensation. This Air Portugal plane was part of the severance deal. This aircraft was grounded for a while because we had to conduct various technical inspections to make sure the aircraft was airworthy,” Gunatilleka said.

He too accepted that there was an issue with the cabin of the aircraft.

Cabin not in UL specs

“It was completely airworthy but of course there was an issue with the cabin of this aircraft. The cabin of this aircraft doesn’t fit our usual long-haul cabin specs. If you look at our normal long-haul aircraft cabin structures, we have 27 business class seats and 259 economic class seats. So the business class cabin was not on par with our standards. So because of that, we had a service limitation and couldn’t operate this aircraft on long hauls, like to London, etc.,” he said.

However, Gunatilleka said that the SriLankan management had been able to reach out and renegotiate with the lessor to procure funding to transform the aircraft to fit SriLankan’s standards, in line with the rest of the fleet.

“But we negotiated with the lessor and got $ 4.5 million to fully refurbish.”

The SriLankan Airlines CEO said that he expected the aircraft to be inducted into the rest of the fleet within six months.

“The seats have been ordered for the refurbishment of the cabin and we expect the seats to arrive in about four to five months. Once the seats arrive, we will immediately refurbish and fit the necessary seats, and then it will be operational for long-haul flights.”

Sealing unwanted expenses
The Sunday Morning learnt that SriLankan Airlines was procuring special water cups for in-flight distribution from a Dubai-based company at a cost of Rs. 7 per cup. SriLankan Airlines Union Chief Janaka Pathirathna acknowledged that the airline had followed this practice. “Due to the unavailability of local suppliers for such water containers, the airline was buying from the Dubai-based company,” he said, adding that three million such cups were bought twice a year at a cost of Rs. 42 million. However, due to the new Government’s green initiative, this practice had been discontinued and instead, bottled water is now served in paper cups. “For over a month now, the airline has been following the new Government’s green initiative and is serving bottled water in paper cups to passengers,” Pathirathna said.

Musical hallucinations and the psychiatric approach

January 31, 2021 byNews Admin No Comments
A recent advertisement to sell the controversial private university building of the South Asian Institute of Technology and Medicine (SAITM) in Malabe has raised many eyebrows, as questions remain..