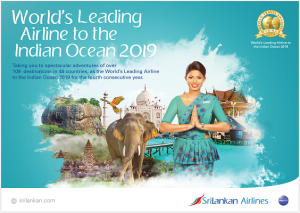 SriLankan Airlines’ Chief Executive Officer, Gunatilleka said “This award reaffirms the success of our consistent efforts to establish a consolidated presence in the Indian Ocean region. Our expansion efforts have been in line with the market demands and we anticipate a few more connectivity additions in the coming months.

Our global connectivity across other key regions has invariably made us a popular choice of travel to and from the Indian Subcontinent via our Colombo hub.”

The Airline has been defending the coveted title since 2016 and in October this year the Airline won the ‘Asia’s Leading Airline to the Indian Ocean’ title at the WTA Asia Oceania ceremony.

The Award proves SriLankan’s presence in the South Asian region, strongly supported by its connectivity of 124 flights a week to and from 11 Indian cities. The Airline also operates to other popular cities such as Dhaka (7 times a week), Karachi (5 times a week) and Lahore (3 times a week).

The Maldives has been Sri Lanka’s extended home market with its connectivity to Male of 21 flights a week, facilitating leisure-seekers from its extensive network of Middle East, the Europe, the Far East and Australia.

SriLankan also became the first Airline to connect Gan Island of South Maldives with the world, thus becoming the only airline that operates out of two points in the Maldives.

World Travel Awards™, celebrating 26th anniversary this year, was established in 1993 to acknowledge, reward and celebrate excellence across all key sectors of the travel, tourism and hospitality industries.

Today, the World Travel Awards™ brand is recognised globally as the ultimate hallmark of industry excellence.

July 10, 2020 byTSM Web Desk No Comments
Private bus owners are to conduct an islandwide strike from today (12) if their demands of waiving off monthly dues to the provincial councils, among others, are not met, The Morning learnt.

May 9, 2020 byTSM Web Desk No Comments
Cabinet Spokesman Bandula Gunawardana today said the government had not wasted a cent of public funds from the time it was elected.