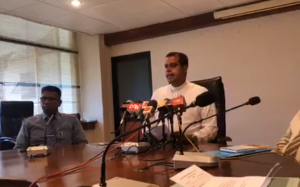 State Minister Sanath Nishantha called a press conference today (12) to respond to a video that has gone viral on social media.

The video depicts a Forest Department officer refusing to allocate mangrove land in Negombo for the construction of a play ground for children of the fishing community .

Nishantha told reporters that the issue arose when he called a meeting to inquire into the progress of the Rs. 1 billion lagoon development project.

He said the project which was initiated in 2014 had been running slow over the past several years.

He said only Rs. 300 million had been utilized out of the funds and that it was at a standstill as the forest department had refused to issue relevant documentation to proceed further.

Nishantha added that the play ground issue was a long standing issue between the the fishing community of Negombo and the Forest Department and that former Minister Vijith Vijayamuni Soysa had promised the finishing community that the issue would be solved.

Nishantha said the children of the fishing community had used the mangrove land as their play ground before it was filled with dredged soil from the Negombo lagoon.

“The Negombo lagoon was dredged as a part of the lagoon development project. The soil was later dumped into the mangrove land,” he said.

He said the fishing community is requesting the land to be restored and be made available for the children while the Forest Department wants the land restored to plant more mangrove trees.

He said due to this issue the forest department was holding documentation required to proceed with the remaining development work of the lagoon.

Speaking further he said some in the political arena are using the video for political gain and that the issue has been blown out of proportion.

March 26, 2021 byMihi Perera No Comments
Two streets in the Jaffna town have been placed under isolation today ( 26).

May 6, 2020 byTSM Web Desk No Comments
The Police have arrested 47,500 curfew violators and seized more than 12,000 vehicles since curfew restrictions were imposed on March 20, according to DIG Ajith Rohana.