December 20, 2020 by Madhusha Thavapalakumar No Comments 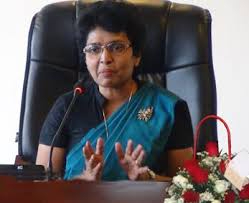 A day before the release of the significantly delayed GDP growth rates of the country for the second and third quarter of this year, the Department of Census and Statistics (DCS) Director General left the department on pre-retirement leave, The Sunday Morning Business learns.

With the GDP figures for the second and third quarter delayed more than usual, Opposition politicians alleged that the Government was exerting pressure on the DCS to delay and manipulate GDP figures of the said quarters. When we asked Bandara whether she had been pressured to retire, she said no and preferred to not to comment further.

It should also be noted that the management of a key economic state institution refused to provide their annual statistics to us as they “are not allowed to release statistics to the media as they are significantly lower than past few years”.

Even though the islandwide lockdown was experiences only during about 10 days of the first quarter, first quarter GDP had contracted by 1.6%, and this statistic was considerably delayed and released only in the first week of August, the night before the general elections. Many opined that data was being held back intentionally till the end of the election, so as to prevent any political disadvantage. However, both the DCS and the Central Bank of Sri Lanka denied this allegation in August and attributed the delay purely to the pandemic.

On 21 August, during a Central Bank press conference, Governor Prof. W.D. Lakshman, responding to media queries on contracted GDP growth, stated that the Central Bank and the DCS “discussed and debated” the GDP, but the department had gone ahead and released the figures they calculated. He even stated that to avoid such issues in the future, the two state institutions are building an official process to arrive at mutually agreed statistics.

In mid-October, issuing a press statement, the DCS said that second quarter GDP data will be released on 15 December, along with GDP data of the third quarter of 2020. The reason provided for the delay was the seven-week long curfew imposed through half of the second quarter, which resulted in some economic activities taking place in ways different to their norms. In any other year, the quarterly GDP estimates are released in less than three months after the quarter ends. For example, second quarter GDP results are generally released before 15 September.

As stated, the DCS released second and third quarter GDP data on 15 December and it revealed that Q2 GDP had contracted significantly by 16.3% while Q3 recorded a growth rate of 1.5%.

Coming out a winner

July 18, 2021 byNews Admin No Comments
There are winners and losers for every crisis. The new Finance Minister can definitely be a winner if he understands the problem and tackles the economic crisis upfront. He can become a success story