STF to be armed with special weapons 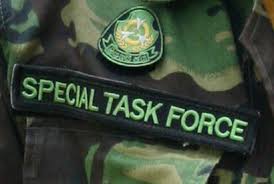 The Special Task Force (STF) is to be armed with special weapons to carry out raids on underworld figures and drug cartels operating in Sri Lanka, The Sunday Morning learnt.

STF Chief Senior DIG M.R. Latheef, speaking to The Sunday Morning, said that it has been decided to arm STF personnel with special weapons to defend themselves while carrying out raids on underworld gangsters and drug kingpins.

He said that the Ministry of Defence was in the process of procuring a large number of weapons which are to be used by the STF.
DIG Latheef said that the weapons will be imported from overseas.

“We are having discussions with some countries. This does not, however, include China,” he said. In the past, China was the main market Sri Lanka sourced weapons and other military supplies from.

Meanwhile, a senior police source told The Sunday Morning that around 1,000 weapons would be procured from the US to be used by the STF.

The STF conducted several raids in the recent past as President Maithripala Sirisena takes his war on drugs forward.