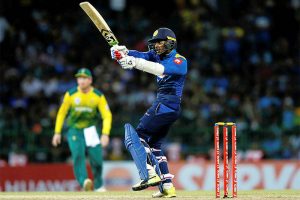 Dhananjaya de Silva plays a drive through the on side

No one can reasonably claim that Sri Lanka have mightier batsmen than India or Pakistan, but their probable top four are perhaps the most watchable bunch in the tournament. Upul Tharanga has velvet offside shots; Kusal Mendis plays serenely on the legside; Niroshan Dickwella is dynamic behind the wicket; and Dhananjaya de Silva – if he plays – is the most pleasing of the lot, his cutting, driving, sweeping and pulling so languid you wonder if the whole thing is happening in slow motion. The challenge, as ever, for this Sri Lanka batting order, is to survive for long enough to give themselves a chance of unfurling those dazzling attacking strokes.

If the top order is smooth, skilful and subtle, Thisara Perera and Dasun Shanaka – both seam-bowling allrounders – are the batting order’s muscle. Thisara is having a resurgent year to follow several lean ones, averaging 40.28 in 2018 with a strike rate of 134. Shanaka, meanwhile, comes into the tournament in white-hot form, having hit a matchwinning 65 off 34 balls in one of his two matches of the recent series against South Africa (he and Thisara had walloped 109 off 67 balls together, in that game), before going on to dominate Sri Lanka’s premier domestic T20 tournament, hitting 81, 60 not out, and 105 not out in his three most-recent innings. Both batsmen have flaws in their games, but if either can bat 25 balls towards the end of the innings, Sri Lanka may achieve the kinds of rapid finishes that have often eluded them in the past.

Nothing quite tells you a side values the art of fast bowling more than picking six seamers for a series on the traditionally placid pitches of the UAE. Pakistan, who’ve played more in that country than any other of late, surprised many with their squad selection.

Mohammad Amir, Faheem Ashraf, Hasan Ali, Usman Khan, Shaheen Afridi and Junaid Khan all feature in the 16-man squad, and this might have something to do with giving all legitimate contenders a chance to stake their claim for a slot in the World Cup in England, where their abilities are likely to carry far greater menace. Besides, such an array of capable options means Pakistan can afford to rest their pacers more frequently than any other side at the Asia Cup – something any fast bowler would be thankful for in hot, tough conditions – and every opposition would do well to be wary of well-rested Pakistan quicks.

While the details of why Pakistan didn’t have a fielding coach for three months have been foggy, it is clear the situation was dealt with in a somewhat ham-fisted manner. It was a surprise Steve Rixon was leaving in the first place, and to let him go following internal disagreements reeks of a situation that might have been handled better, particularly since Rixon himself revealed to ESPNcricinfo that personal reasons had no part to play in his departure.

Then, Darren Berry’s appointment was considered all but a done deal months ago, but as the situation lingered on and Pakistan didn’t have a fielding coach present in Zimbabwe, there were whispers Berry might not be joining after all. Last week, Pakistan finally settled on former New Zealand international Grant Bradburn.

Head coach Mickey Arthur was effusive in his praise for Rixon’s contribution for Pakistan’s improved fielding standards over the past two years, and, sure enough, those standards dipped during Pakistan’s tour of Zimbabwe. Bradburn now has the not inconsiderable job of ensuring Pakistan’s fielding, their most persistent bete noire, continues on the upward trajectory it’s been on of late.

Mustafizur Rahman is expected to do the bulk of Bangladesh’s bowling in the death overs, invariably closing out the innings. In 14 matches in the last two years, he has conceded at 5.53 runs per over in the last five overs of an ODI, and picked up eight wickets in this period. His variations obviously come into play, but so do deliveries which simply run past right and left-handers. Rubel Hossain has taken 11 wickets in the same phase of the innings (since 2016), but he doesn’t have Mustafizur’s control and can leak runs.

Bangladesh have a steady pair with the new ball: Mashrafe Mortaza and offspinner Mehidy Hasan. They did a great job in the West Indies, particularly Mehidy, who was mostly successful in keeping Chris Gayle and Evin Lewis in check. Mashrafe too remained persistent, using both subtle and stark variations in seam and pace to attack and defend in the first Powerplay. Mustafizur Rahman and Rubel Hossain are unlikely to open the bowling, as both are heavily used in the middle and death overs. That has reduced Bangladesh’s attacking options to just one pace bowler in Mortaza.

Afghanistan’s vaunted spin trio of Rashid Khan, Mujeeb Ur Rahman and Mohammad Nabi propelled them through to 2019 World Cup in March and more recently to a 2-1 ODI series win over Ireland in Belfast. But the heavy reliance on them to win matches has partly been a consequence of increasingly thin pace-bowling depth.

At the 2015 World Cup, Aftab Alam was the reserve seamer behind three superb options in Hamid Hassan, Shapoor Zadran and Dawlat Zadran. All three have suffered injury or loss of form since, meaning Alam has been thrust into the role as the leader of the pace attack. Alam fared okay with five wickets in three ODIs against Ireland while allrounder Gulbadin Naib filled out the rest of the overs as a makeshift second seam option. But the lack of a genuine frontline seamer to support Alam is a concern and it may be the weak link that Sri Lanka and Bangladesh look to exploit when the Group B games get underway.

Najibullah Zadran has been an explosive T20 player for Afghanistan and was the only batsman from the country snapped up this summer in an overseas T20 franchise league when he was taken by Montreal Tigers in the Global T20 Canada. The hard-hitting left-hander has been the country’s designated finisher in the shortest format but team leadership’s usage of him in one-day cricket has been a bit more muddled.

Against Ireland, he only played two of the three ODIs, batting once at No. 8 to top score with 42 off 52 balls. Most of his success has come at No. 6, where he has scored five of eight ODI fifties, but often team management has pushed him down the order to accommodate others rather than the other way around and the result is his often being stuck with the tail. The time has come for him to be facing more, not fewer deliveries, in the same manner as the rest of the world’s best 50-over finishers. 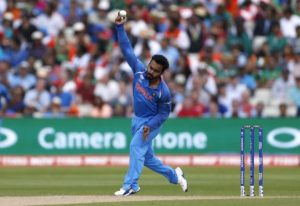 Kedar Jadhav gets low to deliver the ball

KL Rahul, Manish Pandey, Kedar Jadhav, Dinesh Karthik and Ambati Rayudu are all jostling for positions in the middle order. How do India go about picking from among these options?

Karthik’s struggles in England against the red ball and his subsequent ouster from the Test squad makes his Nidahas Trophy heroics and sparkling IPL form seem distant. Pandey had a horror IPL, but has been in a prolific white-ball form: his last four innings – all against the A teams of India, South Africa and Australia – read 73*, 117*, 21* and 95*. Rayudu has overcome the yo-yo setback by showing consistency for India A, and KL Rahul has shown flashes of brilliance across formats but hasn’t been able to marry it with consistency. But none of them can bowl, and, in England, India dearly missed someone from the top six who could bowl.

This, therefore, gives Jadhav an obvious edge on two counts: he is the only one among the middle-order options who can bowl, and his slow offspin with a low-arm slingy action creates difficulties for batsmen on sluggish surfaces. But his fitness has always been a concern, even more now as he is returning from a five-month layoff due to a hamstring injury. With Virat Kohli rested, an extra spot could open up. This means three of these five could feature in any given XI. The race to own these spots will be an interesting one.

Doubts over Bhuvneshwar Kumar’s fitness arose when he wasn’t named in India’s squad for the last two England Tests. He dispelled them by featuring in a match-winning spell for India A late last month. Now, as India’s senior-most fast bowler in the touring party, he will have to play mentor to the other fast bowlers.

Among them is Khaleel Ahmed, the uncapped 20-year-old left-arm fast bowler, who has been effusive in his praise for Bhuvneshwar and the lessons he learnt during their time together at Sunrisers Hyderabad. MSK Prasad, the chief selector, believes that looking ahead to the World Cup, a fast-bowling slot is still up for grabs. Given the left-arm variety of fast bowler suddenly seems to have become rare in Indian cricket, and that Khaleel is likely to bowl a lot in the nets this series, he has the chance to impress his way into the XI and occupy that slot.

November 28, 2018 byRevatha No Comments
Sri Lanka will co-host the ‘Emerging Teams Asia Cup 2018’ along with Pakistan as India refuses to tour Pakistan.