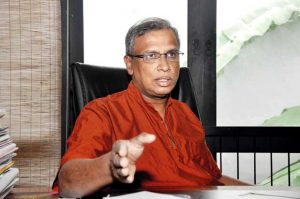 Sumanthiran through his lawyers has written to the Acting Inspector General of Police to open an investigation to an offence under section 3 of the International Covenant on Civil and Political Rights(ICCPR) Act, No.  56 of 2007.

Sumanthiran’s lawyers have stated that 3 articles have been published in three newspapers, which attribute to its client’s words to the effect that the Tamil people should vote for Sajith Premadasa in order to defeat the Sinhala people, or similar variations.

“We are instructed  by our client that the said reports are blatant falsehoods. Our client unequivocally denies making such a statement. These false reports are a propagation of racial hatred that constitutes incitements to discrimination, hostility or violence, which amounts to an offence under the ICCPR Act,” Sumanthiran’s Lawyers pointed out in the letter.

“In the circumstances, we kindly request to immediately investigate the matter and take steps according to law including reporting fact to a magistrate and apprehending those responsible. Our client looks forward to cooperating fully with a criminal investigation launched into this matter and trusts the matter will receive your fullest attention,” Sumanthiran’s Lawyers added.

September 23, 2020 byCharindra No Comments
The government is committed to provide security not only to the parliamentarians but to the entire people, stated the Minister of State for Homeland Security Chamal Rajapaksa in Parliament today (23)

Timely referral of asthmatic children could save families expenses

August 2, 2021 byNews Admin No Comments
As a significant sum is spent by families with children having asthma on travelling to Colombo, and staying overnight to attend regular clinics in tertiary care centres, in addition to the considerabl