October 18, 2021 by Venessa Anthony No Comments

Sri Lanka Sumithrayo is a government-approved charity founded in 1974 by the late Joan De Mel, and was incorporated by an Act of Parliament, No.10 of 1986. Sri Lanka Sumithrayo are registered members of Befrienders Worldwide and function as a non-political, non-religious organisation focused on providing emotional support to help those at risk of suicide. 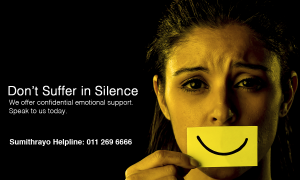 In honour of both Suicide Prevention Month in September and World Mental Health day held on 10 October, Sumithrayo put together a series of eight webinars talking about and highlighting various aspects of mental health and issues that affect it.

In conversation with Jomo, a volunteer at Sumithrayo, he explained that one in every 100 deaths is by suicide. It is the fourth leading cause of death for young people aged 15-29 years. Their first webinar from this series was on the topic of enriching the parent-child relationship. It is believed that if parents were more supportive and aware of their child’s mannerism and behaviours, if a drop in mental health takes place, it will be observed and it will help prevent unnecessary suicides.

The Covid-19 pandemic has had a major impact on people’s mental health. Some groups, including health and other frontline workers, students, people living alone, and those with pre-existing mental health conditions have been particularly affected. Services for mental, neurological, and substance use disorders have been significantly disrupted as well. Jumo explained that one of the webinars that they hosted was on the topic of the psychological fallout of Covid-19, by Prof. Shehan Williams. “In this webinar, the professor spoke about the psychological issues caused by Covid and what people were experiencing during the pandemic,” Jomo explained, adding that ironically, this webinar was held during a lockdown, so it was helpful for people since everyone was feeling stuck inside their homes.

By World Mental Health Day, 10 October, it has been more than 18 months since the start of the Covid-19 pandemic. In some countries, life is returning to some semblance of normality; in others, rates of transmission and hospital admissions remain high, disrupting the lives of families and communities. To honour this, they joined hands with Professor Piyanjali De Zoyza, who hosted a webinar on taming your anger. Jomo added that the pandemic has only brought on feelings of frustration and anger and this webinar was to help people understand how to cope with these negative feelings and lead a healthier, mentally stable life.

In all countries, the pandemic has had a major impact on people’s mental health. Some groups, including health and other frontline workers, students, people living alone, and those with pre-existing mental health conditions, have been particularly affected. This drop in mental well-being could well lead to addictions and even suicide; to raise awareness on this, another webinar was held on said topic by the Mel Medura Director, along with Consultant Psychiatrist Dr. Chamara Wijesinghe in order to help people battle addiction to alcohol, drugs, and other addictive habits.

Despite the universal nature and the magnitude of mental ill health, the gap between demand for mental health services and supply remains substantial. Relatively few people around the world have access to quality mental health services. The serious gaps that still exist in mental health care are a result of chronic under-investment over many decades in mental health promotion, prevention and care. Stigma, discrimination and human rights abuses of people with mental health conditions remain widespread. In honour of World Mental Health Day, Sumithrayo aims to bridge this gap by raising awareness and offering their services to the public at no cost in order to eradicate some of the feelings of hopelessness and loss amongst Sri Lankan citizens.

Another factor that leads to suicide and affects ones mental health is bullying; nowadays, it can even be found and seen online. Sumithrayo held a webinar on Why online privacy and security is important, hosted by Information Security Analyst Sithira Hewaarachchi that detailed how to protect yourself online. The last webinar of the series too will center around the topics of cyberbullying and online harassment to be hosted by Director of Grassrooted Trust Hans Billmoria.

With Sumithrayo, the rights of people living with mental health conditions can be protected and promoted through mental health legislation, policy, development of affordable, quality community-based mental health services and the involvement of people with lived experience.

EFL to host ‘Green Conversations’: A webinar on Covid-19 and the environment

June 4, 2020 byJennifer Anandanayagam No Comments
Environment Foundation Ltd. (EFL) will be holding a webinar on 6 June 2020 at 10 a.m. to discuss the environment-related causes and consequences of Covid-19.

DotDotay live in concert at Barefoot