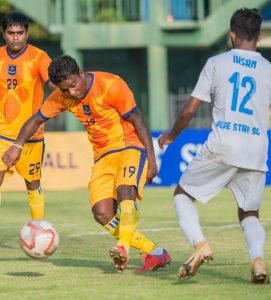 Red Star FC and Defenders FC settle for a goalless draw in week-8 match in the Super League 2021 at the Sugathadasa Stadium yesterday (6).

Defenders FC dominated proceedings in most part of the game. In the first half, they managed 5 shots on target while enjoying the majority of possession. Red Star too had their fair share of chances but failed to convert them into goals.

In the second half, Defenders were more dominant in their game play. The closest they got was when Nilanka Prabath received the ball at the centre of the box. He lost control of it and ended up slicing it away from the post. Red Star’s keeper Mohommad Mubarak was assured in front of goal to save the day for his side.

As we have reached the final two rounds in the league, there will be four matches played tomorrow. Ratnam FC will take on Sea Hawks SC while Renown FC will face Up Country Lions. Both matches will be played at 3.30 p.m. at Sugathadasa Stadium and the Racecourse Grounds.

The other two matches will be played under lights in the same venues. Table toppers Blue Star will take on New Youngs SC while Colombo FC face Blue Eagles SC.

February 28, 2022 byNews Admin No Comments
Sri Lanka came back from 18 for three thanks to another captain’s knock of 74 from Dasun Shanaka to post 146 in the third and final Twenty20 International (T20I) against India at Dharamshala.