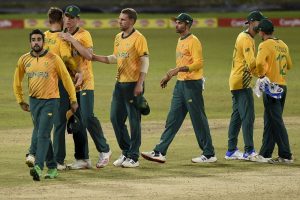 South Africa beat Sri Lanka by 28 runs in the first Twenty20 International to take a 1-0 lead in the three-match series here at the R. Premadasa Stadium in Colombo under lights on Friday (10).

Keshav Maharaj, as the Captain on his T20I debut for South Africa, won the toss and elected to bat first.

Quick-fire knocks from Quinton de Kock, Aiden Markram, and Reeza Hendricks helped the Proteas post a sizeable 163/5 in their 20 overs.

Despite a fighting half-century from Dinesh Chandimal, Sri Lanka only managed to get 135/6 in their allotted 20 overs.

Chandimal announced his return to Sri Lanka T20Is in grand style. Even though he was dropped thrice in the field by South Africa fielders, Chandimal was the only Sri Lanka top-order batsman who managed to time the ball well. His knock will probably seal his place as the back-up wicket-keeper, once Kusal Perera returns to match fitness, for the forthcoming World Cup of the format. For now, Sri Lanka will hope that he carries this good form to the remainder of the series and to the World Cup too. 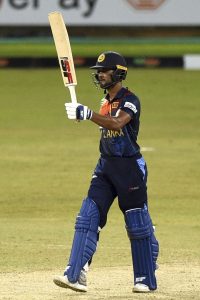 Sri Lanka desperately needed a few extra runs in the Power-play, but both Chandimal and Avishka Fernando struggled to find the right timing. The pair managed only two boundaries as they trotted along to 34, with Fernando being run-out from a direct hit by Anrich Nortje. Bhanuka Rajapaksa was out for a duck for the third consecutive time to have Sri Lanka struggling inside the first ten overs. However, Chandimal kept the lions afloat with few boundaries. The Sri Lankans needed 69 off the last five overs with Wanindu Hasaranga joining Chandimal after Skipper Dasun Shanaka lost his wicket. Some soft dismissals and lack of firepower in their batting order helped Proteas restrict Sri Lanka to 135 for six wickets in the 20 overs. 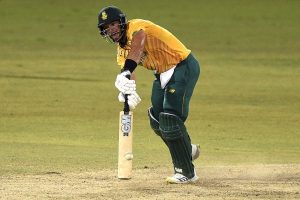 After electing to bat first, the Proteas got off to a flying start. Both De Kock and Hendricks scored boundaries freely and took 47 runs off the Power-play. Once the Power-play was over, Hasaranga was brought in and he dismissed the openers to put the breaks on the scoring. Few boundaries from Markram took them to 107/3 by the 15th over. The stage was then set to unleash in the last five overs, and Markram and David Miller did exactly that. The former top-scored with 48 off 33 balls while Miller chipped in with 26 as South Africa posted a challenging 163/5.

Proteas’ spinners, led by Skipper Maharaj did their job to perfection. They dried down the runs as Sri Lanka continued to struggle against the spin in the run chase. The spin triplet of Maharaj, Bjorn Fortuin, and Tabraiz Shamsi conceded only 63 runs in a total of 10 overs, which included as many as 28 dot balls. 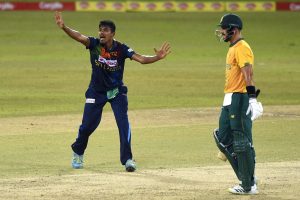 Debutant Maheesh Theekshana learnt the cruel nature of the game. From being the hero of the last One-Day International where he helped the hosts emerge victorious, he was taken to the cleaners, so to say, on his T20I debut on Friday. It was a clear plan from the Proteas to attack him from the first ball, and when Shanaka brought him inside the Power-play, Hendricks struck three boundaries to put the pressure on the youngster. To be fair to him, the pitch wasn’t assisting spin much, either. However, he managed to come back in his final over to take the wicket of Heinrich Klaasen and finished his quota for a decent 35/1.

Keshav Maharaj yesterday became only the second player, after George Bailey of Australia, to lead a country on the debut T20I match.

Similar to the ODIs, Sri Lanka’s struggle against spin continued. Apart from Chandimal, who proved his selection worthy, the rest of the batters struggled to accumulate runs, let alone find the boundary. Shanaka’s form with the bat was in question again as he still remains in search for a good knock after becoming Sri Lanka’s short-format Captain.

Bhanuka Rajapaksa is on the brink of getting axed from the side, one can argue. A third consecutive duck does put his place in the team on a knife edge. Should he be given one more chance? Definitely. True that he is struggling for runs, but he is the only out-and-out big-hitting top-order batsman Sri Lanka have in their ranks, especially with the T20I World Cup looming.

The second T20I of the series will be played on Sunday, 12 September at the R. Premadasa Stadium starting at 7 p.m.

Dwaine Pretorius not out 10

Kagiso Rabada not out 0

Dinesh Chandimal (wk) not out 66

Chamika Karunarathne not out 22

Next Match: On Sunday, 12 September at the same venue

FACTS: Rugby Championship, SANZAAR, and Bledisole Cup… What are they?

August 13, 2021 byRevatha No Comments
In case, our rugby fans do not know

October 5, 2018 byRevatha No Comments
Shaw, 18, reached his hundred off just 99 balls to surpass the record of Abbas Ali Baig.