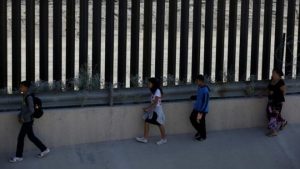 The US Supreme Court has given the go-ahead to Trump administration plans that severely limit the ability of migrants to claim asylum.

Under the rule, people arriving via a third country must claim asylum there first before arriving at the US border.

Legal challenges against it continue but the ruling means for now it can be enforced nationwide.

The plan will affect migrants from Central America who travel north, often on foot, through Mexico.

The Trump administration unveiled the new asylum policy in July but it was almost immediately blocked from taking effect by a lower court ruling by a judge in San Francisco.

There has been a legal tussle over his block since but the decision issued on Wednesday will temporarily delay his rulings and allow the policy to come into effect.

Curbing migration levels has been a key goal of Donald Trump’s presidency and forms a major part of his bid for re-election in 2020.

What will the changes mean?

The change will affect non-Mexican migrants trying to enter through the US southern border.

This includes, but is not limited to, those from Central American countries who have made up the vast majority of those seeking asylum so far this year.

Of the 424,000 family members arrested on the south-western border up until August 2019 almost 419,831 were from Honduras, El Salvador and Nicaragua and only 4,312 were from Mexico, border patrol data show.

Many of those arriving are fleeing violence or poverty and travel north through Mexico until they reach the US border. Upon arrival, they must pass a “credible fear” interview to seek asylum in the US.

The rule change means they would fail had they not claimed asylum in another country they had first passed through.

The American Civil Liberties Union, which challenged the ruling, argued it drastically limited those eligible for asylum.

“The current ban would eliminate virtually all asylum at the southern border, even at ports of entry, for everyone except Mexicans,” it said in a petition.

A lawyer for the group described the ruling as a “temporary step” and said it remained confident at challenging the change.

“The lives of thousands of families are at stake,” Lee Gelerent said.

Anyone who has been rejected by a third country or is a victim of human trafficking can still apply.BBC

February 14, 2020 byTSM Web Desk No Comments
Coronavirus cases are not rising dramatically outside China despite a spike in Hubei province, the World Health Organization (WHO) says.

US hits nearly 2,600 Covid-19 deaths in one day; highest since April